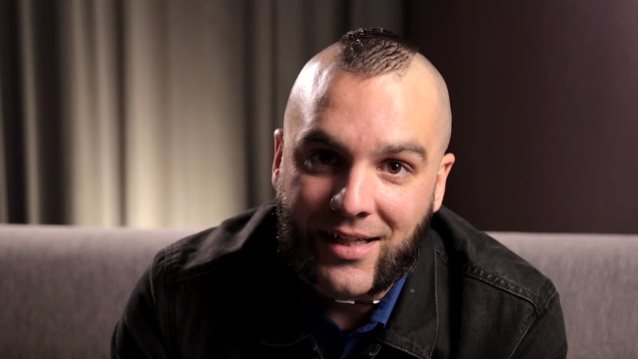 JESSE LEACH On KILLSWITCH ENGAGE's 'Incarnate': 'I'm An Open Book On This Album'

Niclas Müller-Hansen of RockSverige.se recently conducted an interview with KILLSWITCH ENGAGE singer Jesse Leach. A couple of excerpts from the chat follow below.

RockSverige.se: In what way did [the new KILLSWITCH ENGAGE] album ["Incarnate"] change you?

Jesse: I think it initially started out that I had an idea of what I wanted to do and where I wanted to go lyrically. I had a moment where I questioned stuff. I questioned myself as a writer, I questioned if what I was doing was the best it could be, and the answer was no, so I kind of spiraled myself into depression, almost purposely. I purposely put myself into a dark place and started thinking about the bigger questions of life, and from there I started to write stuff I never thought I'd write before and came to self-realizations about how I was raised and what I believe and don't believe. I'm in a good place now, but I question a lot of what I was raised with and I question a lot of my beliefs. All this stuff that surround how I was brought up, I realized some of that stuff I was just believing because I was taught it and I didn't really accept it as true. The way the state of the world is now and the way the American media has been aiming towards… between police brutality and gay rights, all these things that just upset me and anger me, I realized that the organization of religion and the organization of politics, I don't want anything to do with that anymore. Who we are as humans is so much greater than these confines that this particular systematic way of thinking puts on us. I think I liberated myself through a pretty heavy depression, but it was an artistic depression. I almost don't want to use depression; it was just a dark place. I didn't go quite down into the rabbit hole like I have before in the past, but enough so it affected my wife and she was worried about me. But, to me, it was like I needed to do it. I'd wake up in the morning and have extremely strong coffee and go out into the wilderness and spend all day just by myself and contemplate life and contemplate God. These heavy questions and I wanted to tackle that on this record, and I think that I did.

RockSverige.se: Being in a darker place, does that enable you to write better, more than being in a "happy" place?

Jesse: I do, but I did write some of this record when I was in a happy place and the topics change. The stuff that I wrote about myself on the record, I think I had to be in a darker place, but the stuff I wrote about the world… there's actually two songs on the record that don't even have anything to do with me. They're written about people that I'm close to and a particular fan that reached out to me that had been some really heavy stuff. I was in a good place writing those. It's just having perspective. That's the cool thing about this record; I was in two different head spaces. We actually broke the record down to side A and side B, like a throwback to the cassette tapes. We purposely grouped those songs and I think they are two different headspaces. The first part you're gonna get is the more positive and uplifting stuff and the second part of the record goes into the darker stuff.

RockSverige.se: When it comes to lyrics, is there a limit to how open you can be or can you write about anything about yourself?

Jesse: I think it's how you write about it. I'm an open book on this album. There's stuff there, implied, that are some of the darker things that have happened to me and some of the darker things I've done, are in the lyrics, but I've written them in such a way where hopefully the listeners can draw their own conclusions and get their own inspiration. I think it's so important. You don't want to beat someone over the head with a message, whether it's political or sort of personal or whatever. I think music needs to be painted with a broad enough brush stroke where the listeners can engage themselves to be a part of that process. I wouldn't want to take that away by overexplaining.