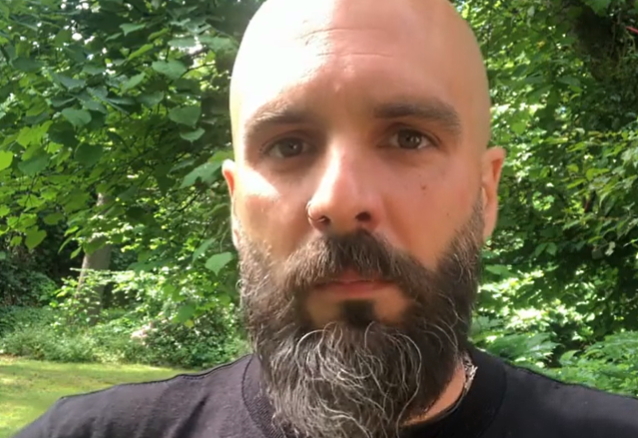 KILLSWITCH ENGAGE singer Jesse Leach spoke to the "Talk Toomey" podcast about his decision to collaborate with the band's former vocalist Howard Jones on "The Signal Fire", a song from KILLSWITCH's latest album, "Atonement". He said (as transcribed by BLABBERMOUTH.NET): "When I initially [re]joined [KILLSWITCH in 2012], I was super insecure about [stepping in after Howard], 'cause the dude's got a voice of steel. Let's be real — he's an amazing vocalist. And for me, it took pushing through my insecurity and realizing that I definitely have a unique style. I'm not always on key — I'm a little sloppy; I'm kind of a punk rocker — but my heart and soul is there one hundred percent. So I think for what I might lack in technique I make up for in just sheer determination to deliver the goods… So, for me, it was getting over myself. And the guys had their issues too — let's be real. It wasn't me at first. I'm, like, 'I don't care. I'm just happy to be out here doing this.' So once all the unspoken shit was said and done and everything was squashed, it kind of popped into my head of, like, 'Why are we not doing this? He's back out here doing his thing.' At the time, it was DEVIL YOU KNOW. And I was, like, 'Dude, he's killing it. And he's putting forth his best efforts and he's not giving up.' And I respect the shit out of that… And the fact he got his health in check, which is a whole other thing. And it just kind of felt like a no-brainer."

He continued: "When we started to work on 'Atonement', we had already become friends. And he came out to one of our shows, and I kind of hit it off with him. I was, like, 'Dude, we have a lot in common.' And flash forward to the end of the night, Howard and I are annoying the entire bus by blasting hip-hop. We both knew the words to the same songs, and we were just laughing about a lot of shit. And then hearing those guys tell jokes, the entire night — that first night when we all hung out — was just fun, and it just kind of clicked. I was, like, 'Let's bring him in for a song.' Then I started working on 'The Signal Fire', and I was, like, 'This is the perfect song. It's about unity.' And from that, it was, like, whenever he's around, if we saw him at a festival, 'Come onstage. Do 'The End Of Heartache'. Here's your mic. Go. I'm gonna go drink on the side of the stage and watch this shit. It's fucking awesome.' And yeah, we just clicked. And I'd text him back and forth. When we first started becoming friends, it was constant texting back and forth, just fast friends. And we've let it settle. We both got busy, basically. I've got a lot of respect and love for the dude, and he's an incredible vocalist — period. And I really love what he's doing with LIGHT THE TORCH. I think he's just killing it, man."

Leach added: "I think it's important for the fans to know that there's no bad blood [between the band and Howard] anymore. Name a band that's really done that. There's so much bullshit. People allow the drama and all that shit to get in the way. Who cares what people think? I don't give a shit anymore. And I'm happy to have Howard jump on stage with us and tour with us with his new band. Why the fuck not, man? I'm standing on his shoulders with my career. If he didn't do what he did, I wouldn't be where I am, so why the fuck would we not reciprocate that? So I think it's just all about keeping it in the family. And if we can help LIGHT THE TORCH out, so be it. One day they might help us out. We never know."

Leach appeared on KILLSWITCH's self-titled debut and sophomore album, "Alive Or Just Breathing", before exiting the band. Jones took over on vocals for "The End Of Heartache", "As Daylight Dies" and the 2009 self-titled set before being dismissed from the group nine years ago.