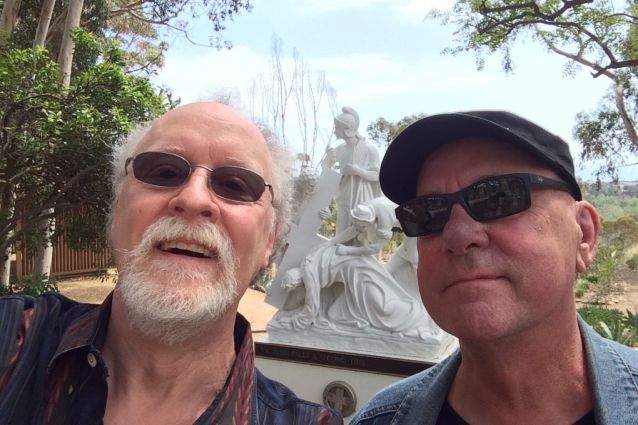 Doane Perry, drummer with JETHRO TULL, has paid tribute to his longtime friend Neil Peart, who died on January 7 in Santa Monica, California after a three-year battle with glioblastoma, an aggressive form of brain cancer. The iconic RUSH drummer was 67 years old.

Earlier today, Perry took to his Facebook page to write: "I want to thank all the people who have so kindly written, texted, posted or called regarding Neil's passing. Like so many, this has completely undone me and I haven't quite known where to start. I am working on something more substantial to be posted in the future when things have settled a little for everyone.

"During the last three and a half years, Neil faced this brutal, aggressive brain cancer bravely, philosophically and with his customary humor, sometimes light and occasionally dark — all very characteristic of him, even given the serious situation and the odds handed to him at the time of the diagnosis and subsequent surgery. But he fought it. By his own request for privacy, few people knew, but his understandable response to this news in no way excludes or diminishes ALL of those who also knew him, worked with him or loved and admired him from up close, or at a distance. His tenacious approach to life served him well during these last years and although he primarily kept his own counsel, he retained his dignity, compassion, understanding and his deeply inquisitive nature, which never deserted him. Remarkably, considering the severity of his condition (glioblastoma) and through the resulting aftermath, he really had no pain. This was always my first question when I saw him. 'Any pain?' I asked. 'No pain', came the reply. What a blessing that was. We were all grateful for that.

"For every one of us who loved him, near and far, this is a loss that is difficult and impossible to summarize in a few short paragraphs. The outpouring of love, respect and appreciation from every imaginable quarter for this extraordinary, singular talent and beautiful man with a mind like no one I have ever met, is touching beyond words. To those that had to guard and hold on to this information closely for three and a half years, for obvious and protective reasons; his wife Carrie, daughter Olivia, his loving family, band, colleagues and friends, they have my undying admiration. You know who you are.

"Apart from his deeply gifted, genius talent and prolific output, which he brilliantly displayed through music, lyric and prose writing and that staggering storehouse of knowledge across an array of subjects in multiple fields, he remained a kind, gentle, considerate and modest soul and a consummate gentleman… as well as an extraordinary friend. If you were his friend, you knew it and he understood how to be the best friend that you could ever hope to have. I think I speak for all, known and unknown to him, to say he will be deeply missed, eternally loved, appreciated and remembered for his many invaluable contributions to music, art and the written word. That will be forever celebrated.

"Despite what he knew and we knew which was inevitable, I believe there is some sense of relief that this long, difficult odyssey has finally ended.

"Thank you my dear friend, for passing this way. We are all richer for your presence and light in our lives."

I want to thank all the people who have so kindly written, texted, posted or...