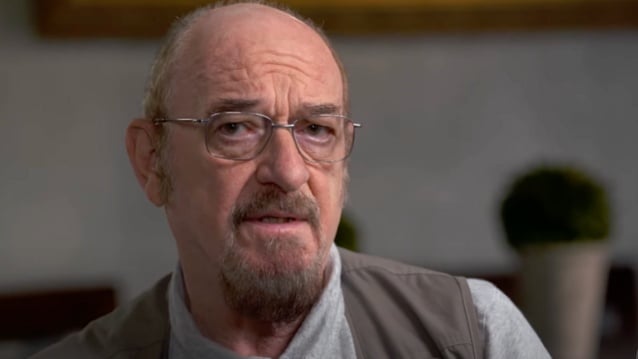 JETHRO TULL's IAN ANDERSON Pokes Fun At Guitarists Who Rely On Roadies To Tune Their Instruments: 'What Wimps'

In a new interview with Darren Paltrowitz, host of the "Paltrocast With Darren Paltrowitz", JETHRO TULL's Ian Anderson was asked about his decades-long reputation as someone who doesn't shake hands with people. He said (as transcribed by BLABBERMOUTH.NET): "I've suffered from chest infections since I was quite young, and throat infections and upper respiratory tract infections. It's been a pretty constant problem for me intermittently. So I've got used to trying not to unnecessarily attract the common cold viruses, be they rhinoviruses or coronaviruses or the flu virus. Because it really is, for me, not just a question of three or four days of feeling a little under the weather; I usually end up [spending] four or six weeks with serious bronchitis and feeling really rough. And of course, chances are I'm on tour during that period.

"The last 20 years or so, I've carried a face mask in my hand luggage," he continued. "I remember the first time I bought one was actually in Tokyo, in the airport. And I remember buying a couple of more in Dubai airport. They were just there in case I needed them — if I was in an environment where I was particularly worried about getting a virus. And I've been an inveterate hand washer for many years. Playing the flute or the guitar, the last thing you want is greasy hands, either from shaking hands or opening doors or doing whatever. You really wanna have dry, clean hands when you're playing instruments. So nobody is allowed to touch my instruments and nobody is allowed to shake hands with me or otherwise contaminate me in those precious moments between leaving my dressing room and getting back to it. No one touches my microphone. I handle things that are potentially sources of contamination. I take care of that myself. I'd just almost prefer to do that.

"These racks of guitars backstage that I see… I was teasing Joe Bonamassa about his 17 guitars or something he had aligned at the back of the stage. I said, 'Joe, what are those for? You can't possibly play all of those in a night.' He said, 'Well, I just have them with me in case I suddenly decide I want to play that one.' Meanwhile, of course, he's paying tens of thousands of dollars to ferry these things around the world, along with probably a couple of roadies who do nothing else other than look after his guitars. But it makes him and indeed other people feel secure. And I guess they're very proud of the instruments and very proud of their collection of guitars. But they do have to consign them to the grubby fingers of other people when it comes to the practicalities.

"I just cannot conceive of somebody changing my guitar strings for me," Ian added. "That is equivalent… If I was an armed policeman in the USA, strapping a Glock 17 to my thigh, I would not be entrusting to somebody else to even clean it or to load 20 rounds of 9 mil into the magazine and put it in and make sure everything was hunky-dory and hand me the gun back and send me out there into the cruel and crazy world. Would anybody? It's bad enough when movie actors can't be bothered to check their movie prop guns. I think stuff like that is so important. It feels like a matter of life and death when you go onstage with an instrument that it's gotta work for you. You don't wanna have that little element of doubt that maybe it's not quite in tune or mechanically it's not operating perfectly. So I think it feels like a matter of life and death, and indeed the embarrassment that comes from something not working properly, you really do die a death. And I've seen a lot of artists, including me, and that's happened to 'em onstage, and it's not a pretty sight.

"I remember the first time we played with Jimi Hendrix in Stockholm. Everything was going wrong for him. His guitar wasn't working. I mean, it was just terrible to watch. It was sad. And he was getting so frustrated and angry. He just couldn't get his guitar in tune. It was a white Gibson SG that he was playing unusually, and he couldn't get the damn thing to go in tune at all. But then SGs are just really not terribly good instruments, in my opinion, in spite of the fact that Tony Iommi [BLACK SABBATH] has made a very good living out of playing those things."