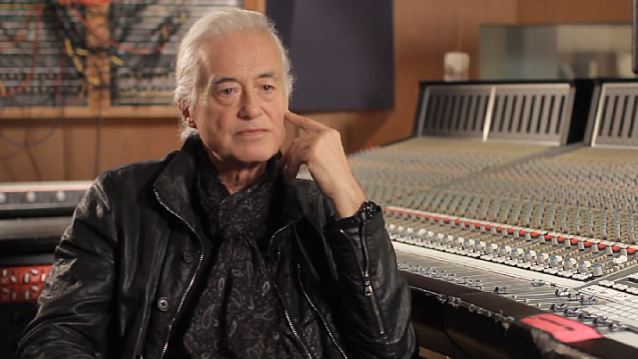 Accordng to The Pulse Of Radio, Jimmy Page says that LED ZEPPELIN's 1975 "Physical Graffiti" double album gained strength by collecting the band's previous outtakes and morphing them with their new work. "Physical Graffiti" — which has just been reissued, remastered, and expanded under Page's supervision — featured unused tracks from "Led Zeppelin III", "Led Zeppelin IV" and "Houses Of The Holy", combined with then-new 1974 sessions in the English countryside at Headley Grange, a home away from home for the band.

Jimmy Page spoke to Rolling Stone and shed light on the construction of "Physical Graffiti", recalling, "It gave us the chance to put in the material that was left over from the first visit to Headley. There were three tracks that were left off of the fourth album, and that was 'Boogie With Stu', 'Night Flight', and 'Down By The Seaside'… Each of them had their own individual charm and character. So with those, plus the fact that 'Houses Of The Holy' was a track that wasn't included on the album 'Houses Of The Holy', that was four things straight away [to include]. And, you know, given the chance of having a good run at this writing and recording process, I didn't want it to be a double-album with any padding on it. It would be a double-album with all character pieces, the way that LED ZEPPELIN did their music with the sort of ethos of it, if you like, that everything sounded different to everything else."

Page was asked about how the band came upon such a unique and iconic title for the album. "Graffiti had started to appear on buildings at the time, and usually it was quotes from William Blake, and it wasn't in the graffiti which we know think of, which was more from the hip-hop times," he said. "Nevertheless, graffiti was appearing, and I imagined something, which was like a physical reaction to it. Since we were in a recording studio, if you're doing a recording, and it's going on the tape, even though its magnetic tape, that's like a graffiti in itself. The music was a physical manifestation."

Jimmy Page says that one shouldn't underestimate how comfortable ZEPPELIN was while creating new music while camped out at Headley Grange. "'Trampled Under Foot' comes out virtually out of, like, John Paul Jones is doing an electric piano vamp and that comes together really… relatively quickly, the way that 'Rock And Roll' did on the fourth album on our first visit there," he said. "The whole point of going back to Headley Grange was that it was really a tried and tested blueprint. I knew that was going to work, and that's why I elected to go back there, and yeah, we got a double album at the end of the day."