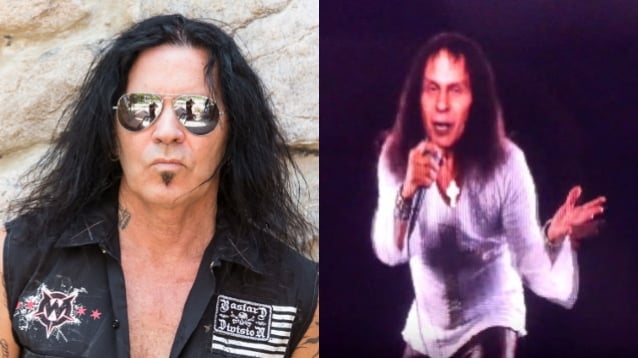 QUIET RIOT singer Jizzy Pearl, whose JIZZY PEARL'S LOVE/HATE band opened for the "Dio Returns" tour in 2019, was asked in a new interview with the "Cobras & Fire" podcast for his take on the Ronnie James Dio hologram. "Dio Returns" featured a holographic image of the legendary metal singer performing alongside a living backing group consisting, in large part, of Ronnie's onetime DIO bandmates.

"Well, at the time, everyone was sort of bagging on it, but I was the opening band, so I felt it was my duty to defend it," Jizzy said (as transcribed by BLABBERMOUTH.NET)

"[I have] mixed feelings about it," he admitted. "Whitney Houston, they're doing one in Vegas now, of a hologram.

When interviewer Bakko expressed his disappointment over how the hologram looked in person, saying that he "thought it was gonna be more three-dimensional," Jizzy said: "You're supposed to suspend reality. You're not supposed to sit there and… I mean, you can sit there with a notebook and a clipboard and pick the shit apart, but you're supposed to embrace the idea of Dio.

"Look, I toured with Dio for years and I was friends with the guy," he continued. "So I knew the guy, I hung with the guy, I drank booze with the guy, so it was maybe weirder for me to see it. But then again, I realize that it's a theater piece. So take it for what it is."

The Dio hologram production used audio of Ronnie's live performances from throughout his career, with the DIO band playing live, consisting of Craig Goldy on guitar, Simon Wright on drums and Scott Warren on keyboards, along with Bjorn Englen on bass. Also appearing with them were ex-JUDAS PRIEST singer Tim "Ripper" Owens and LYNCH MOB frontman Oni Logan.

This past September, Ronnie James Dio's former wife and longtime manager Wendy Dio said that she decided to pull the plug on the hologram of the legendary metal singer because she "wanted to see real Ronnie." Speaking about how her reaction to the hologram evolved over the years, she said: "When I first saw it, I cried. Then I got used to it because it wasn't Ronnie. And then we took it out [on tour]. The first [version] was not that good. The second one was a lot better. But I decided that I don't wanna do it anymore; I decided I want real Ronnie. So we're working on a stage with the DIO band, which will be going out in March [of 2022]. Instead of having a hologram, it will have film of Ronnie with the live band playing and with special effects and everything else. So that's what we're working on. We're working on it with Paul Dexter [who was Ronnie's lighting designer and stage designer for years] and a bunch of other people. And also the Eyellusion people, who did do the hologram, are doing a bunch of special effects for us with it."