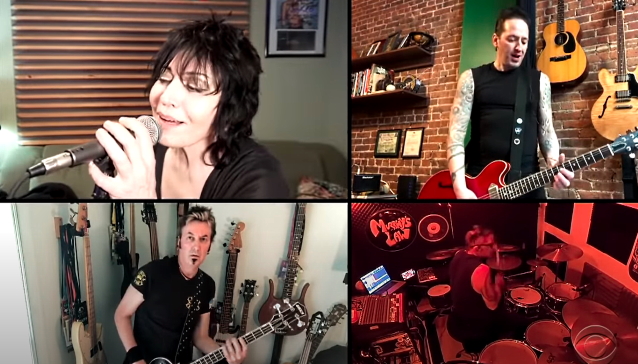 Joan Jett performed her interpretation of the T. REX hit "Jeepster", from the Hal Willner-produced collection "Angelheaded Hipster: The Songs of Marc Bolan And T. Rex", on last night's (Thursday, September 10) episode of "The Late Late Show With James Corden". You can watch video of the performance below.

"Angelheaded Hipster: The Songs of Marc Bolan And T. Rex" was released on September 4 via BMG. On the album, Jett delivers a stunning tribute to her teenage idol, harkening back to her formative years on the Sunset Strip absorbing everything Bolan and T. REX had to offer. For her reimagining of the standout track from the 2020 Rock And Roll Hall Of Fame inductee's chart-topping "Electric Warrior" album, Jett is joined by a group of luminaries, including Marc Ribot on guitar, Jim White (PJ HARVEY, CAT POWER) on drums, Thomas Bartlett arranging and on piano (THE NATIONAL, SUFJAN STEVENS) and production by the late Hal Willner.

JOAN JETT & THE BLACKHEARTS were scheduled to embark on "The Stadium Tour" this summer with MÖTLEY CRÜE, DEF LEPPARD and POISON, but the trek has been postponed until 2021 due to the coronavirus pandemic sweeping the globe.