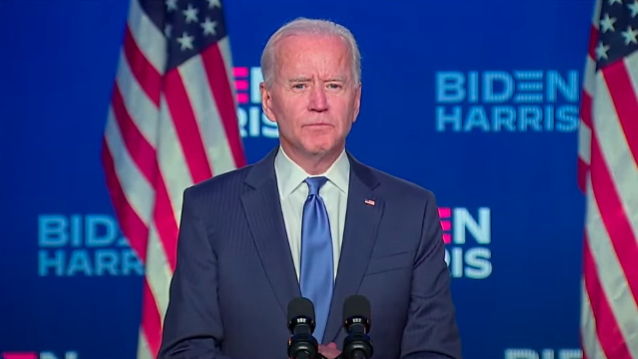 Scott Ian (ANTHRAX),Alex Skolnick (TESTAMENT),Tracii Guns (L.A. GUNS),Jay Jay French (TWISTED SISTER) and Todd La Torre (QUEENSRŸCHE) are among the rockers who have reacted to the news that Joe Biden will become the 46th president of the United States.

Prior to becoming the Democratic presidential nominee, Biden served as vice president under former President Barack Obama. He is also Delaware's longest-serving senator.

Before Biden's win was made official, Trump was seen arriving at his golf course in Virginia Saturday. He later tweeted several unsubstantiated allegations of massive voter fraud and irregularities, writing: "I WON THIS ELECTION, BY A LOT!"

Earlier this week, an international election observer mission to the U.S. concluded there was no evidence of election fraud and Tuesday's presidential vote was "competitive and well managed," despite "logistical challenges" as a result of the COVID-19 pandemic.

"Baseless allegations of systematic deficiencies, notably by the incumbent president, including on election night, harm public trust in democratic institutions," Michael Georg Link, the leader and special coordinator of the short-term Organization For Security And Co-Operation In Europe (OSCE) observer mission, said in a statement Wednesday.

"Nobody — no politician, no elected official — should limit the people's right to vote," Link added.

Following Biden's win, Trump issued the following statement: "We all know why Joe Biden is rushing to falsely pose as the winner, and why his media allies are trying so hard to help him: they don't want the truth to be exposed. The simple fact is this election is far from over. Joe Biden has not been certified as the winner of any states, let alone any of the highly contested states headed for mandatory recounts, or states where our campaign has valid and legitimate legal challenges that could determine the ultimate victor. In Pennsylvania, for example, our legal observers were not permitted meaningful access to watch the counting process. Legal votes decide who is president, not the news media.

"Beginning Monday, our campaign will start prosecuting our case in court to ensure election laws are fully upheld and the rightful winner is seated. The American People are entitled to an honest election: that means counting all legal ballots, and not counting any illegal ballots. This is the only way to ensure the public has full confidence in our election. It remains shocking that the Biden campaign refuses to agree with this basic principle and wants ballots counted even if they are fraudulent, manufactured, or cast by ineligible or deceased voters. Only a party engaged in wrongdoing would unlawfully keep observers out of the count room — and then fight in court to block their access.

"So what is Biden hiding? I will not rest until the American People have the honest vote count they deserve and that Democracy demands."

In the past 4 years I have not said the word President with a name after it. Not even one time. It feels glorious 😂 beautiful ✌ to say the words PRESIDENT BIDEN thank you for #hope for rocknroll! MORE THAN ANYTHING thank you @JoeBiden for my KIDS CHILDHOODS BEING RESTORED 🙏🇺🇸 https://t.co/0SBmaaONSD

What a birthday gift! 🥳 Thank you for all who dared to care. For all who used their vote as their voice to roar, "we ARE better than this" 💙 Congratulations America 🇺🇸 #PresidentBiden#VPKamalaHarris 🇺🇸 Congratulations @joebiden@kamalaharris ✊🏽 #Oteppic.twitter.com/fEjatQC2RA

We are back baby pic.twitter.com/GRSWzkvKAw

No one can silence the voice of the people. GOD BLESS AMERICA!!!

A good day for democracy, a bad day for a coward and a bully !!

Objectively, Trump is personally in a far better position by losing than he would be by winning. He finally has the branding that he’d aspired to have (albeit in a different field than he’d intended) AND he’s now in position to ACTUALLY make all that money that he claims to have.

It’s all over but the whining & crying & pouting

Because of voting and stuff

Fuck yes America!! It’s time to get this shit together! Trump followers, let go of all that fear and hate you have been served for the past four years. It was all a lie! Don’t drink the cool aid and go down with that clown. Let’s celebrate and beat COVID together!

What a great day!

Happy to see 'ol Donny relegated to the dustbin of history. Can we all agree to refer to him as "Lame Duck President Trump"? How long do we have to wait before ripping into the corporate stooge aka "President Elect" Biden? Asking for all my friends.

YESSSSSSS!!!! I know we’ve got a lot of work in healing our beautiful nation .. I know we can learn and grow 💜🇺🇸 #america

A post shared by Official Stephen Perkins (@stephenperkinsdrummer) on Nov 7, 2020 at 8:56am PST

Time to heal. Time to come together and move forward. 💙🇺🇸✌🏻

Global warming must be real, because Christmas came early this year!

Congratulations to President-elect Joe Biden and Vice President-elect Kamala Harris on her historic achievement. Thanks to all who took the PJVotes pledge and voted this historic election year. Deep gratitude to our many partners including these Pennsylvania changemakers @PeopleFor_ @MakeTheRoadPA and @LCVoters who worked tirelessly to help their neighbors vote. Our work is never done. Hope you will join us, stay engaged now and always. #PJVotes Flag 1 📸: @TuckerNichols Flag 2 📸: Jasper John