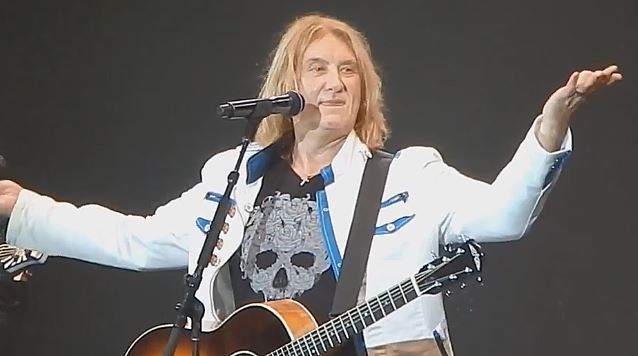 DEF LEPPARD frontman Joe Elliott was forced to sit out part of the band's inaugural "Hysteria On The High Seas" cruise after coming down with "severe laryngitis." He was unable to join his bandmates for Saturday night's (January 23) concert aboard the MSC Divina, having already taken part in an unplugged storytellers concert and VIP reception at the ship's Pantheon Theatre.

Fan-filmed video footage of DEF LEPPARD's concert with guest singers can be seen below.

"Def Leppard" was made available through earMUSIC worldwide (excluding North America, Japan) in the following formats: CD, 2LP gatefold, digital download and on all streaming services.

The album entered The Billboard 200 chart at position No. 10 with first-week sales of just over 30,000 units — nearly all from pure album sales.