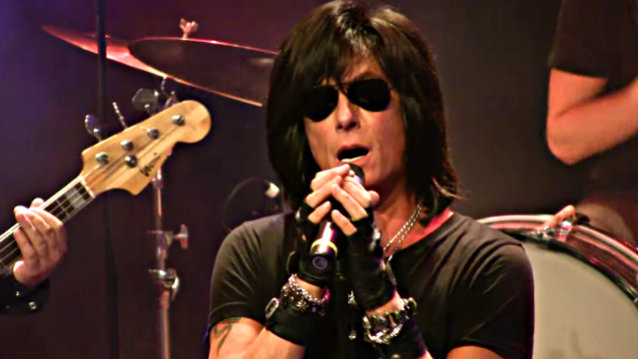 Former RAINBOW singer Joe Lynn Turner says that it is "very possible" that the band will reunite at some point in the near future but has declined to elaborate, claiming that he is "not supposed to talk about it."

Speaking to Greece's Rock Overdose 17 years after RAINBOW played its last concert in Esbjerg, Denmark, Turner was asked if he could share any news about the possibility of a reformation of the Ritchie Blackmore-led band that existed from from 1975 to 1984 and 1993 to 1997. "Well, I'm gonna be honest with you right now. Yes. Possibly. It's very possible," Turner, who fronted RAINBOW from 1980 to 1984, said. "Last year, I wouldn't say it. But this year I say it. It's possible. It's a very big possibility that something might, just might, happen. I heard talk of it and all I can say is I'm not supposed to talk about it, but I'm talking to you now, and all I want you to do is say yes. There's a very big possibility that we may have a reunion. And it would be phenomenal."

In a 2009 interview with Antimusic, Joe Lynn Turner spoke about the immense commercial success RAINBOW enjoyed in North America and Japan after he joined the band. "I had a whole career in Japan because of RAINBOW," he said. "I mean, RAINBOW was doing like one night at [iconic Tokyo venue] Budokan [before I was part of the group]. When I joined the band, we did like four nights at Budokan. I mean, the Japanese always grew up in more commercial end of it, you understand? They really did love the songs. That's the Japanese mentality, you know. There was a certain amount of commerciality inside…"

He continued: "You've got to remember, the Japanese picked up rock and roll from us. They're only like 20 something years old doing rock... and so it's not a whole lot of rock that they saw. So they always like the more commercial hair bands and stuff like that. And when RAINBOW came out with this incarnation, we had the looks and we had songs and we had a whole stage presence and everything. And it wasn't just dungeons and dragons and, you know, kill the king and all this. We actually had girls in the audience.

"I'll never forget the roadies when I first started playing in the band. They were, like, 'Thank god for you,' and I was, like, 'Wwwwhwhat?' and they said, 'See the girls out there in the audience?' and I said, 'Yeah,' and they said, 'Thank you for that.' [Laughs] And I go, 'Okay, okay, I get it.' Because there wasn't a whole lot of females when Ronnie [James Dio] was there, because A) the subject matter wasn't there, you know what I mean? And it was the time for MTV when I came into the band, so you had to kind of have a look too."

He added: "I tell you one thing. When you get the girlfriends coming to the shows, the guys don't mind. And once you kind of knock them over the head and they realize you're not such a bad bloke and you're not so pansy-assed or anything like that, I mean, you can rock, they come over to your side too. They sort of [go], yeah, alright, I kinda like Turner, he's okay. He still looks a bit gay, but he's alright. [Laughs]"

After Blackmore's final departure from DEEP PURPLE in 1993, he resurrected RAINBOW before focusing exclusively on BLACKMORE'S NIGHT, the renaissance-inspired rock band he formed with his now-wife Candice Night.