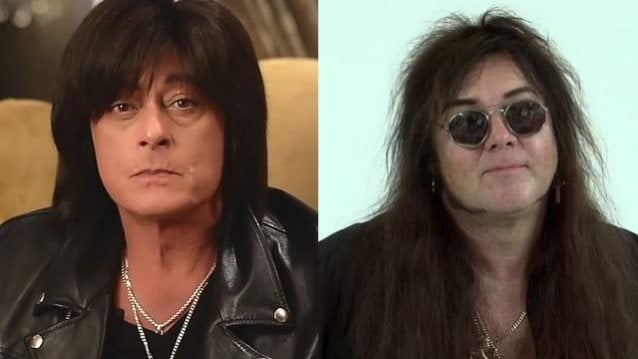 Joe Lynn Turner is the latest vocalist to fire back at Yngwie Malmsteen, saying that the Swedish guitarist's disparaging comments about some of the singers that have worked with him in the past are nothing but "rantings of a megalomaniac desperately trying to justify his own insecurity."

Turner's comments came in response to a recent interviewMalmsteen gave to Metal Wani in which the iconic axeman said that he had no interest in collaborating with vocalists like Turner, Jeff Scott Soto and Tim "Ripper" Owens ever again. "I'm very comfortable singing myself, first of all," Yngwie said. "Secondly, there's a certain disconnect when you write the song and you have someone else sing it for you. And it's kind of like a fakeness about it. I always wrote everything — I wrote all the lyrics, I wrote all the melodies, everything; it's just somebody else sung it. And to me, the singer is nothing else than a different… like a bass player or a keyboard player — they're not more important than any other musician. And they, unfortunately, seem to think that they are. And I've kind of had it with their sort of… self-absorbed sort of way, and I'm very much against it. No. I don't like that. I don't like any of those people, and I don't like to do anything with them ever again."

Two days after portions of Yngwie's interview with Metal Wani were published on BLABBERMOUTH.NET, Turner took to his Facebook page to respond. He wrote: "In regard to the recent Malmsteen article, I feel compelled to rebut his delusional statements.

"The 'Odyssey' album was his biggest success that he has not since and will never repeat again. It's undeniable that I am responsible for 50% of the writing credits, namely the melody and lyrics and 100% of the vocal performances."

Joe continued: "Malmsteen's statements can only be taken as the rantings of a megalomaniac desperately trying to justify his own insecurity. His claim that 'singers' are too egotistical is moronic and pathetic coming from him. The fact that he would lash out at all the great vocalists and respectful gentlemen that he had the good fortune and honor to work with is simply outrageous.

"How sad does a man become when he has to downgrade others to make himself feel big and important. This man thrives on public approval and needs total control because he lives in personal fear.

"I quit 'RISING FORCE' because of his intolerable and twisted ego.

Soto and Owens previously responded to Malmsteen, with Jeff writing on his Facebook page: "Can't say I blame [Yngwie]; his vocal prowess has increased .05-fold the past two decades! Why would he want to work with horrible hacks like myself, Ripper or Joe... and deal with our egos... like wanting to hear ourselves onstage within the cavalcade of Marshalls, or getting our measly salaries on time (or at all)." He added: "On a side note, I wrote more than 3/4 of the lyrics and 1/2 melodies for 'I'll See The Light Tonight', all of the lyrics for 'Caught In The Middle' and 'Don't Let It End' (he wrote the title and got 50% of authorship) and all off 'On The Run Again' (title included). So much for writing EVERYTHING."

Owens also took a jab at Yngwie for his comments, saying that he was "pretty sure" Malmsteen wouldn't work any of the above-mentioned singers again "because we all quit." Tim then added: "Let [Yngwie] enjoy the singing!"

Malmsteen's recent U.S. trek marked his first run of dates in the States since 2016 when he took part in the "Generation Axe" tour alongside Steve Vai, Zakk Wylde, Nuno Bettencourt and Tosin Abasi.

In regard to the recent Malmsteen article, I feel compelled to rebut his delusional...