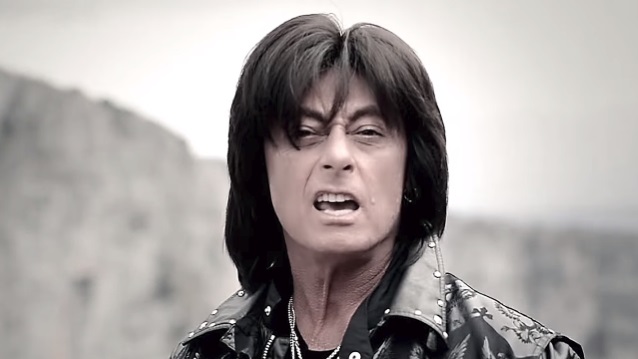 JOE LYNN TURNER Stands By Statement That PUTIN Is 'Telling The Truth', Says TRUMP Is 'Really Trying To Do A Good Job'

Joe Lynn Turner says that he still stands by his comment that Vladimir Putin is the only world leader "telling the truth," explaining that "there's more freedom in Russia" than there is in the United States of America.

The former RAINBOW and DEEP PURPLE singer made headlines in 2015 when it was revealed that he joined a list of Western celebrities who publicly expressed support for and defended the Russian president, whose image had suffered greatly because of Moscow's aggressive foreign policy.

Two years later, Turner says that his opinion of Putin has remained unchanged. "He still is [telling the truth]," the singer told Kraig Casebier's "American Barber In Prague" in a new interview (see video below). "Honest to God, I got a lot of crap for [saying] that [before]. But it's true, and he still is, whether you like him or not. He may be a gangster, but he's a good gangster. And I say there are good gangsters.

Joe went on to lament the state of American politics and denounced the culture of extreme political correctness, which he believes has gone too far.

"I think America's lost its way," he said. "We've lost God, we've lost a lot of things that made that country great. And I'm sorry to say, being an American — Italian-American, and holding an American passport… I have had uncles… and my father did military service for twelve overseas stripes — the whole thing. And I went to Iraq for the troops, so anybody that wants to challenge that, c'mon, bring it on, because I think I know a few more things than you. But I think that we've lost a lot in our values of America. We can't even speak freely anymore. There's more freedom in Russia; I can tell you that. I've done a lot of time there and still will. I've probably got a 20-city tour coming up next May. People don't understand what Russia is [in America]."

Asked by Casebier if he thinks any changes in America are on the way now that Donald Trump is president, Turner said: "Well, look, Trump's supposed to be the great white hope. And he ran up against the 'deep state' there. If anybody knows what the 'deep state' is, it means that the American government is more corrupt than any Russian government ever was, or still is. The corruption there is just overwhelming.

"We are connected with a lot of politicians that I know, Navy SEALS, shall I say… people in intelligence, people like this, and they tell me all the time what is really out there — they reaffirm my knowledge, let's say, 'cause I know it," he continued. "So I think that [Trump is] trying to do a good job — he's really trying — but he can't make moves until this is cleared up. And I think now it's coming [up on a year] since he's been inaugurated in November, that there will be a change — simply because he's gonna lock up some people, or at least he should lock 'em up… clean the swamp, like he says he wants to do. And I think that he'll have a great relationship with Putin. And I think between the two of them, there'll be no threat of war, they'll clean up the Middle East… The only thing I'm worried about is Israel, what's happening there, because there's a lot of political melee going on with Israel. So he's got a job in front of him, but I think he'll do a lot better once his hands are untied."

Turner clarified that he is "not saying" he is "a big Trump fan, but I'm certainly not an Obama-Hillary [Clinton] fan. I think Democrats now, they need to revamp that whole party," he said. "Not that the Republicans are much better, but that party has fallen… I used to be a Democratic county committee man when I was younger, and it's not the same party."

As if sensing the criticism that will likely follow his comments, Turner preemptively defended himself by saying: "I said Putin was telling the truth, 'cause he is telling the truth. I got subpoenaed by my own government, okay? So all these naysayers and these haters who are gonna see this about me and stuff, you guys have no clue. 30 percent of the American people have passports, so 70 percent of you are isolated and know dick about it — you have been nowhere and done nothing. Excuse me, but that's what you should have been told a long time ago."

The 66-year-old singer went on to explain that he was "subpoenaed" by the U.S. government after he played "three charity shows" in Russian-annexed Crimea, which he called a "wartorn country." "The people had a great time [and] we had sellout houses," he said.

Turner also expressed his belief that too many of today's artists are afraid to discuss social issues in their music, preferring instead to stick to the generic, trivial topics that the rock genre has always been synonymous with.

Turner is married to Maya Kozyreva, a lawyer from Minsk, the capital of Belarus. "She is my greatest asset in life. She's my angel," he told Guitar World in 2012.