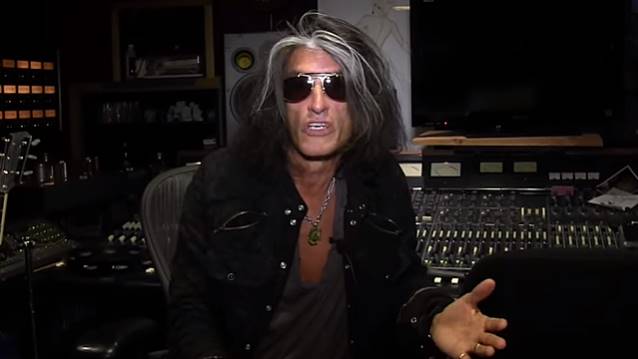 According to The Pulse Of Radio, AEROSMITH's Joe Perry pulled no punches in his recent autobiography, "Rocks: My Life In And Out Of Aerosmith", either about his life and career or AEROSMITH's now-infamous inner-band troubles. His biography is the third from the band, following AEROSMITH's 2003 joint bio, "Walk This Way: The Autobiography Of Aerosmith", drummer Joey Kramer's 2009 memoir "Hit Hard: A Story Of Hitting Rock Bottom At The Top", and frontman Steven Tyler's 2011 book, "Does The Noise In My Head Bother You?"

Joe Perry told The Pulse Of Radio that ultimately, the thrill of what AEROSMITH accomplished musically trumps all the problems that the band has endured due to drugs, women, management and ego issues. "It's really the five of us, y'know, as a band," he said. "And it's still exciting to walk out onstage with these guys. And that, I think, is the glue that keeps us coming back. Sometimes I ask that question myself, y'know, ‘Why am I still doin' it?' Well, when I walk out onstage in Moscow and everybody out there is singing words to songs that we wrote in the basement, or, y'know, in some studio somewhere. It's nothin' short of a miracle, y'know? And so we kind of have a lot of respect for that."