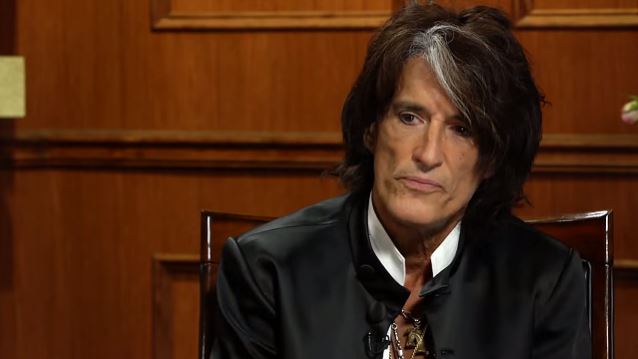 Legendary AEROSMITH guitarist Joe Perry recently sat down with Larry King on the Emmy-nominated series "Larry King Now" and opened up about his new memoir, his rocky relationship with singer Steven Tyler, crazy groupie stories and much more.

Perry was vocal about his turbulent history with bandmate Tyler. "I think that we had a lot of troubles separating our musical differences from our personal lives," he said. Perry went on to explain to Larry what his relationship with Steven is like today, "We still have our rough spots, but I accept the way he is, just like he accepts the way I am," he said. "I have to take as much responsibility for the bumps and the avalanches in the road as he does."

Joe also talked about his new best-selling book, "Rocks: My Life In And Out Of Aerosmith". "I wouldn't have written the book twenty years ago because of some of the things that I put in there, 'cause I wouldn't have wanted my kids to read it, but now they're grown up," he said. Perry also talked to Larry about actor Johnny Depp who wrote the foreword of Perry's memoir. "He's an amazing guitar player and I — I can't say enough about his love for the blues and for the history for the music and, frankly, he's got one of the best guitar collections I've ever seen," he said.

Although Perry himself "was never a groupie guy," the rock star shared a wild story about a guitar player that was in his band for the first year "[He] was washing off his "Mr. Important" with a bottle of Jack Daniels, because he was the only one who was married and was fooling around."

Joe wrapped up his interview by answering social media questions from some of his biggest fans, including how his recent recording session with the iconic THE BEATLES member Paul McCartney went.

"It was fascinating to watch how he worked, that it was taken for granted that we would just play live in the studio, all of us as a group, as opposed to one guy playing and then another guy playing," Joe said. "The way he went about it , he was very friendly about the whole thing, very focused and very… I hate to say 'old school,' but the kind of recording I believe is the best recording, which is get it live in the studio. And I asked him about the left-handed/right-handed guitar-playing thing. And he said, 'You know, that's a good question.' Because he plays left-handed. And I'm left-handed and I play right-handed. And I didn't have any examples to go, 'That guy plays left-handed, so that's how you can do it.' I just took the instruction from the little 45 that came with the student guitar, and it said, 'Put the neck here, and put the pick here, the plectrum here, and go from there.' And I didn't know any guitar players, period, back then as an example. And he said that there are a number of pop stars that he was aware of that played left-handed, so he knew that that was an option."