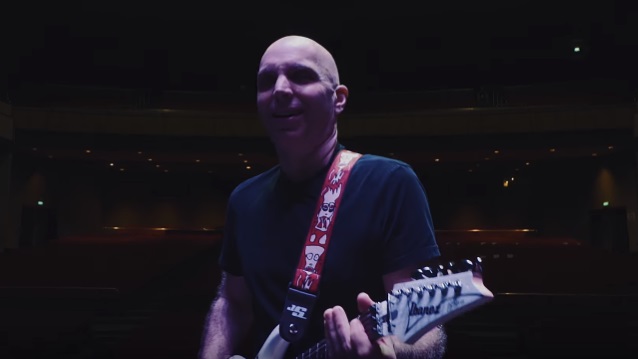 JOE SATRIANI: 'Beyond The Supernova' Documentary To Air On AXS TV

AXS TV, the premier destination for classic rock programming, takes viewers on an unforgettable journey with one of rock's greatest guitar gurus in the broadcast premiere of the 2017 documentary "Joe Satriani: Beyond The Supernova" — airing on Tuesday, March 6 at 10:00 p.m. EST / 7:00 p.m. PST.

Directed by Satriani's talented filmmaker son ZZ Satriani, "Beyond The Supernova" is a deeply personal introspective that captures the legendary virtuoso at a pivotal point as he contemplates the future of his career, 30 years after the release of his groundbreaking multi-platinum masterpiece "Surfing With The Alien". Traveling throughout Asia and Europe on his acclaimed "Surfing To Shockwave" world tour, Satriani reflects on his legacy and plots his next steps, while performing music from his landmark 15th studio album, "Shockwave Supernova", and giving viewers a unique glimpse into the autobiographical elements of the record and its role in helping him determine the creative direction that he is heading towards. In addition to Satriani, "Beyond The Supernova" features appearances and performances by former Frank Zappa guitarist Mike Keneally, versatile bassist Bryan Beller, and prolific percussionist Marco Minnemann, as well as special cameos by fellow guitar masterminds Steve Vai and Guthrie Govan. The film received high praise from critics and fans when it was highlighted last October at the Mill Valley Film Festival.