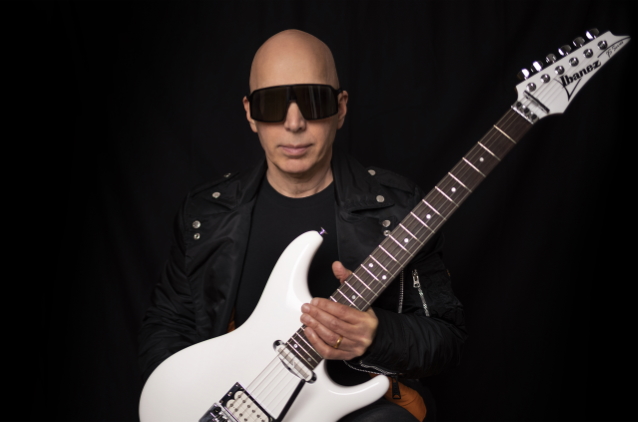 JOE SATRIANI: Why I Decided Against Joining DEEP PURPLE

Joe Satriani, who was drafted into DEEP PURPLE to complete Japanese dates in December 1993, and stayed on for a European summer tour in 1994 following the abrupt departure of founder Ritchie Blackmore, spoke to VintageRock.com about his decision to decline a permanent position in the band. He explained: "I took my cue from those players that were laying the groundwork for the kind of stuff I do, like Jeff Beck. I saw the freedom that he had to play with interesting players that would inspire him to do different things. I thought that's really great. I love watching him live and I love his albums and he keeps you guessing and he's always progressing as a guitarist. He just keeps going forward. I love that attitude of just moving forward all the time. He's not really hampered like a legacy band where they're going to have to play their hits. Like when AEROSMITH goes out, they're just going to have to play those songs that are their hits. They've got to play 'Janie's Got a Gun', they've got to [play] 'Dream On'. They can't do a concert without it. But Jeff Beck really doesn't have to do anything he doesn't want to do. [Laughs] He can say, 'No, this is where I'm at right now. Check this out. No one else can do it. I can do it.' [Laughs] I love that attitude. It's a dangerous move. You miss all that input from a band and you miss the chance that you can go mainstream. It's very difficult for Jeff Beck to go mainstream like AEROSMITH or any other pop band where you're talking billions of streams and TV appearances and all the awards, that kind of stuff. However, everybody knows and respects Jeff Beck as a player, as a musician, as a composer, and they wouldn't dream of him changing his attitude. We like him being the iconoclast that he is.

"I had that choice to make when [DEEP PURPLE bassist] Roger Glover asked me to join DEEP PURPLE," Joe continued. "I just thought, I'm Joe from Long Island. I don't belong in this British royalty metal band. I knew I just didn't belong. I was a big fan of Ritchie Blackmore and I thought I'll never be able to rectify it. I'll always feel guilty that I have to copy Ritchie and I didn't want to do that.

"I've had friends who've had successful turns replacing famous people in bands," Satriani added. "But I remember what they would always say at the end of it. I remember Steve Vai telling me once, 'Joe, if you can avoid it, don't ever replace anybody famous in a band because the fans — they never let you forget it. You're always compared to the first guy, the original guy.' So I thought I'm going to take the chance. I've got a good relationship with my fans, and we'll stick together and try to just make better and better albums."

Last month, Satriani praised DEEP PURPLE for hiring fill-in guitarist Simon McBride to step in for Steve Morse, calling the Irish player's recruitment "a great call" by the band. Satriani made his comments while speaking to Eonmusic about new album "The Elephants Of Mars", which was released on April 8.

Morse's temporary hiatus from the classic rock icons was announced in late March. In a statement, he said that his wife Janine is battling cancer and added that he hopes he can rejoin PURPLE on tour "after she gets a clean bill of health."

Speaking to Eonmusic, Satriani applauded PURPLE for choosing McBride to fill in for Morse.

"Simon is a great call for that, so that's really great," he said; "I mean, the band is close to Simon, and Simon's a great guitarist."

Morse effectively took over Blackmore's DEEP PURPLE slot in 1994 and has since been in the group longer than Ritchie.

Back in May 2018, Satriani responded to an apparently two-and-a-half-decade-old interview with Ritchie which was posted earlier that month in audio format on the current RAINBOW leader's official YouTube channel. In that interview, Ritchie referred to Satriani as "a brilliant player" but criticized him for "never really searching for notes" or "playing a wrong note." Blackmore added: "If you're always playing the correct notes, there's something wrong — you're not searching, you're not reaching for anything."

During an appearance on "Rock Talk With Mitch Lafon", Satriani was asked for his reaction to Blackmore's comments. "Well, it's unfortunate when somebody that you look up to has something negative to say about you," Joe said. "So that part will always hurt. I wouldn't hide my feelings about that.

"I get criticized on both sides of the fence for the opposite offenses," he continued. "And I don't quite understand it other than most of the time, when someone has criticism, it's because they're challenged and they feel that they have to strike out. So I get it — I understand why he would have to say something negative. I can kind of laugh at it, because I'm not like that myself. I tend to just look at the positive of another musician and focus on that."

In Blackmore's original interview, which was apparently conducted in 1997, he stated about Satriani and Morse: "I'm just glad they [DEEP PURPLE] found a guitar player to carry on because I thought I was going to be shackled to this band for the rest of my life. It was like a ball-and-chain thing, and luckily, they said, 'Well, we found someone.' 'Thank God, I can get out!'

"I haven't listened much [to DEEP PURPLE's recent recordings]. I just know that Joe Satriani and Steve Morse are brilliant players. I remember Steve Morse with the DIXIE DREGS; they're fantastic.

"If I hear someone really technical running up and down a fingerboard, I can hear that for a couple of minutes and then I start to kind of get bored and think of other things, like playing football or something. But I do like to hear someone reaching for something, not quite making it and then sometimes they do make it.

"I personally am into the minstrel technique — if I hear someone playing a lute or playing a crumhorn, it just moves me, I don't know why. Guitar players I find kind of boring — and that's not meant as a dig. I find myself boring.

"I think the main objective is to move people, make people think in their heart. I personally am not interested in appealing to other musicians. To me, it's more inspiring to move someone who doesn't know anything about music, but has a feel. They can say, 'I don't know what you're doing, but I just feel that's something there.' That, to me, is an incredible compliment, as opposed to, 'Well, you've just run up and down the fingerboard. That's wonderful, very fast.' All that means is I've just practiced the hell out of the guitar and I'm not really saying anything. I'm going from A to B, but not seeing anything on the way."