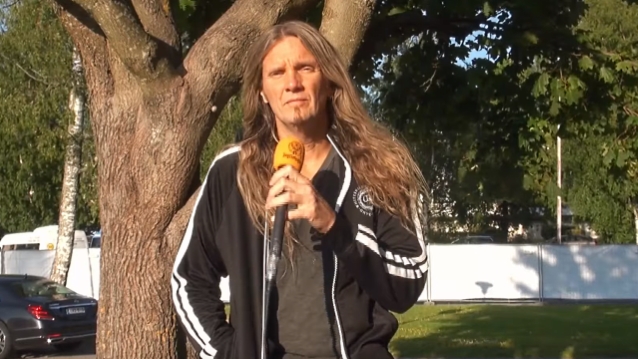 Prior to WHITESNAKE's performance in Pietarsaari, Finland on July 12, guitarist Joel Hoekstra spoke with Kaaos TV. The full conversation can be seen below. A few excerpts follow (as transcribed by BLABBERMOUTH.NET).

Joel: "Every second I get to play in WHITESNAKE is a blessing, man. I just love this band, love this great lineup we have. [I'm] just having a great time."

Joel: "I think we've been really, really surprised. Not that we weren't expecting them to go over well, but just to the degree which with the audiences have received the new songs. 'Hey You' has been going over tremendously. 'Trouble Is Your Middle Name', 'Shut Up And Kiss Me', those songs in particular have those gang vocals in the chorus that the crowds just grab on right away even if they haven't heard the song. That's been on our side, and it's really a blast to watch the new material be received so well. You want to find that balance between moving the band forward and playing new material and representing it well, representing a new record that we're very, very proud of, and of course, maybe the more casual fans who are there to hear the fits, you obviously aren't going to ignore them either. You find the balance."

On whether classic artists should incorporate new material into their live shows:

Joel: "I think that's up to each individual. I don't think there should necessarily be a rule for it. I think every band should do what they want to do. I think some bands for a while there thought, 'Well, it's not really smart to create new music.' Some want to do it. The only thing I can speak for is that I think that David wants to do it out of a place of wanting to create and being in love with the process of making the music still. I think that's great — I love seeing that in him, and of course, that's wonderful to be a part of, to be able to create new music with someone like himself who's done so much in the music industry."

Joel: "If I had to say it in one word, it was surprisingly fun. David [Coverdale, vocals] works really quickly, so he's very instinctive and intuitive with his writing. You just have to make sure that you're locked in and full concentrated and fully there with him. Thankfully, we've been together now five years, so we have a strong enough relationship that if there's an idea I present to him and he's not into it, he doesn't bother wasting my time. If he doesn't like it, he just says, 'Not that one,' and I'll come up with my next idea. Thankfully, I would say for the most part, we're on the same page when it comes to ideas or how we develop them."

On the band's goals when making the album:

Joel: "David always steers the ship. The albums with WHITESNAKE really have much more to do with David's vision than they do anybody who's in the band. It's our job to support that, and often, most ideas are like that — they're collaborative in nature, in that David will have a foundation for a song, [and] you're there to kind of develop those with him and have options. It happens quick — it's bang, bang, bang — and you're off and running... It's always going to be David's vision, and I'm sure Reb [Beach, guitar] would tell you the same — that Reb and I are both there to support that and develop ideas with him and help him get to the point where he's got the album looking like he wants it to look or sound."

Joel: "The longer I've been able to be around in the hard rock scene, the more it's nice to see friendly faces and familiar faces, and even meet some guys who maybe we've heard of each other but we haven't had a chance to meet. Getting to meet John 5 for the first time this summer was really cool for me. He's such a great guitar player, and obviously, somebody I admire... [It's] not fanboy, but just, like, respect and camaraderie. I would say [it's] just a healthy level of respect. I'm not necessarily in awe of the situation anymore, because I'm working with my heroes. I'm working with David Coverdale. At a point, you get used to it, but it's great to make friends with people you grew up admiring."

Joel: "[We'll] continue to support the record for the time being, and beyond that, you've got to ask David. We're all going to make it very difficult on him to want to walk away from rock n' roll. We want to keep him going. I love working with him, so we're just going to do our best to keep him inspired."

"Flesh & Blood" was released on May 10 via Frontiers Music Srl. The disc follows the 2011 critically acclaimed studio album "Forevermore" and 2015's "The Purple Album", a reimagining of DEEP PURPLE classics from Coverdale's time in that band.

Joining Coverdale on "Flesh & Blood" is the powerhouse band comprised of Hoekstra and Reb Beach on guitar, Michael Devin on bass, Tommy Aldridge on drums and Michele Luppi on keyboards.