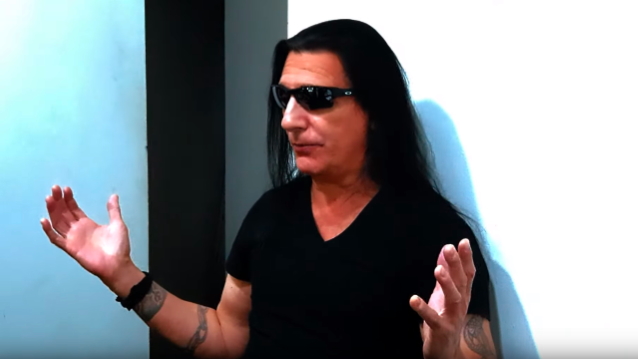 Joey DeMaio has once again dismissed suggestions that MANOWAR is calling it quits, saying that people "had the wrong idea" when the band announced its "final" tour more four ago.

Back in May 2016, MANOWAR revealed that it would say "thank you", "farewell" and "goodbye" to its fans on a world tour that would be "bigger and beyond anything" the group had ever done. Calling the tour "The Final Battle", MANOWAR said that the fans who come to see the veteran metal act perform would "be left with an eternal memory; having witnessed the band that has dedicated their blood, hearts, souls and every moment of their career to true heavy metal."

Naturally, most fans assumed that MANOWAR would never play again after the completion of "The Final Battle", but DeMaio has since clarified that the band has every intention of continuing for years to come.

In a brand new interview with Summa Inferno, conducted ahead of MANOWAR's March 14 appearance at the Hell & Heaven Metal Fest in Mexico City, DeMaio addressed the band's future activities, explaining that he and his bandmates have grand plans for the coming months.

"People had the wrong idea about 'The Final Battle' tour," he said (see video below). "When we announced the name of the tour, people immediately thought, 'Oh, no. They're gonna break up. They're gonna stop forever,' which, that was never the intention. The intention was for sure to take a break for some time because we're working on a big rock opera — and I mean musical rock opera; however you wanna look at it. But it's gonna be a big epic story. And so that takes time. We can't put that together like that. And the last EP, songs that were released, will be part of this massive big epic story. So when we announced that, there was a confusion and people thought, 'Oh, no.' But that's not the story. We're here in Mexico for the first time — but not the last time."

A year ago, the 65-year-old bassist said that he was "too young to retire" and blamed "some journalists" for "reinterpreting" MANOWAR's 2016 "farewell" tour announcement in order to "sell magazines." He told Bulgaria's Z Rock Radio: "Journalists make their money by what they write and photographers make their money by having a 'wow' picture. But I'm very protective over our fans, and when people write shit that ends up affecting and causing problems for our fans, I get mad."

In a 2017 interview with "Outdoor Adventures With Jayson", MANOWAR singer Eric Adams said that he would "miss the big stage" after the band completes its final tour. He said: "This is it. We've got one last tour coming up… But all good things have to come to an end at some point."