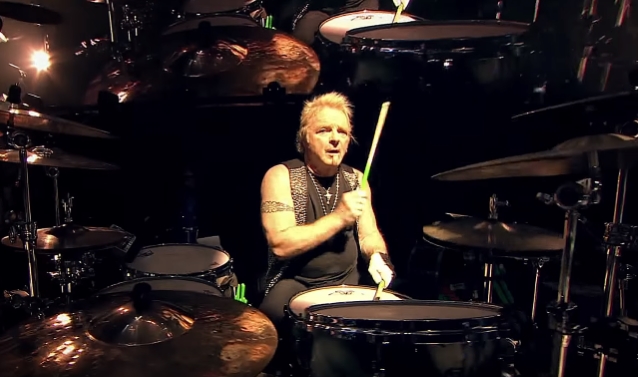 JOEY KRAMER Explains Decision To Sue His AEROSMITH Bandmates: 'This Is Not About Money'

Joey Kramer, AEROSMITH's drummer for 50 years, has released a statement explaining his decision to sue the band for preventing him from returning to the stage.

An original member of the legendary rock group, Kramer last performed with AEROSMITH in April 2019 before suffering what was described at the time as a "shoulder injury." Other reports have indicated that he also injured an ankle.

For the past eight months, AEROSMITH has been performing with a stand-in drummer, Kramer's drum tech John Douglas.

After celebrity gossip site TMZ reported earlier today that Kramer had filed a lawsuit against his bandmates claiming they are refusing to allow him to perform with them when they appear on Sunday night's Grammy Awards telecast, the drummer issued a statement, saying that being "removed" from his "rightful place on stage to celebrate" AEROSMITH's success "is just plain wrong."

"Ever since I was 14 years old, I had a set of drumsticks in my hand and a passion to create music. Being prohibited from playing with a band that I have given 50 years of my life to supporting, is beyond devastating.

"This is not about money. I am being deprived of the opportunity to be recognized along with my peers, for our collective, lifetime contributions to the music industry. Neither the MusiCares' Person of the Year Award nor the Grammys' Lifetime Achievement honors can ever be repeated.

"The fact that I would be asked to audition for my own job, demonstrate that I can play at 'an appropriate level' and play better than my temporary fill-in with a moving target of made-up standards is both insulting and upsetting. Other band members and their lawyers will likely attempt to disparage my playing and claim that I am unable to play the drums right now. Nothing could be further from the truth. I did everything they asked — jumped through hoops and made both a recording of playing along solo to a recent live recording of the band — one I had never heard before, and that process was videotaped. But I did it, and I did it well. In AEROSMITH's 50-year history, no other band member has ever been subjected to this scrutiny let alone be asked to audition for his own job!

"I hope our fans can understand that all I'm trying to do is get back to playing with the band that they love — and that's AEROSMITH with all five original members. The greatest magic and success of AEROSMITH happens when all the band’s founding members are together in the house. To be removed from my rightful place on stage to celebrate our success — a success that acknowledges my own life's work, is just plain wrong."

Last year was not the first time AEROSMITH performed without Kramer. Back in August 2014, AEROSMITH canceled a California concert because Kramer was dealing with "heart complications" that required immediate surgery. The musician later revealed that he had an angioplasty, explaining that it was "just strictly a hereditary thing. There's a family history, and I was the victim. But no more." Kramer missed a week's worth of AEROSMITH shows after his 2014 surgery — his son Jesse filled in on drums — before getting back to work.

AEROSMITH is among the artists that will perform at the 2020 Grammy Awards on January 26 at the Staples Center in Los Angeles. AEROSMITH will also be honored as the 2020 MusiCares Person Of The Year. The tribute will take place during the 30th-anniversary MusiCares benefit gala, two nights prior to the 62nd annual Grammy Awards telecast.

AEROSMITH recently extended its "Deuces Are Wild" Las Vegas residency with 15 more dates in early 2020 due to "extraordinary demand."