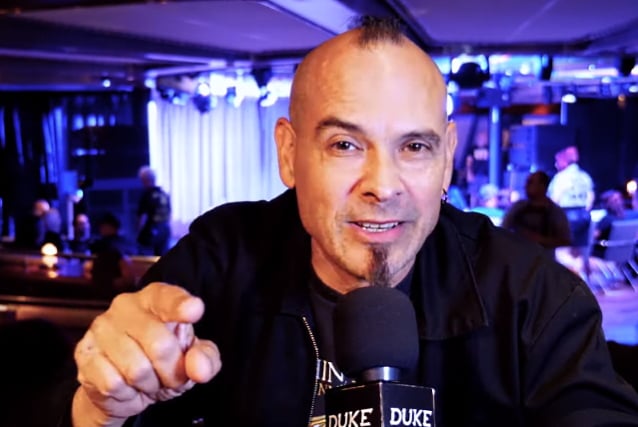 France's Duke TV met with Joey Vera aboard this year's Megacruise and discussed ARMORED SAINT and FATES WARNING's next albums, his upcoming tour with MERCYFUL FATE in 2020, and being a pioneer of the metal community. You can watch the chat below.

Speaking about ARMORED SAINT and FATES WARNING's recording plans, the bassist said: "ARMORED SAINT will be in the studio from December into the early part of spring. Hopefully this will be finished and record coming out in the fall. That's the plan. FATES WARNING is not quite done writing, but pretty close. I think that the FATES record is also gonna be recording probably around January, February. I'm still very involved in both of those bands, obviously. So, for sure, a new ARMORED SAINT record and a new FATES WARNING record is on the horizon in the next 18 months, for sure."

Regarding his involvement in the MERCYFUL FATE reunion, Vera said: "I've been following, obviously, MERCYFUL FATE and KING DIAMOND, and I've known King for quite some time. The MERCYFUL FATE thing is that they were planning on doing these dates in the summer of 2020, and, unfortunately, Tim Hansen, the original bass player, [was] going through some health issues and [was] unable to do some touring. King came to see me when I was on tour with FATES WARNING, and he broached the idea to me about possibly doing this. And, of course, I was completely honored that he would consider me for doing this. So, early tape-trading days for me, 1981 and 1982, I got the first EP from MERCYFUL FATE and I was a huge fan right away. So, it's full circle for this to come up so much later — it's pretty unreal. So, it's an honor for me to be doing something like this. I wanna honor Tim and try to make the band presentable in that way."

FATES WARNING's next disc will be the follow-up to "Theories Of Flight", which came out in 2016.