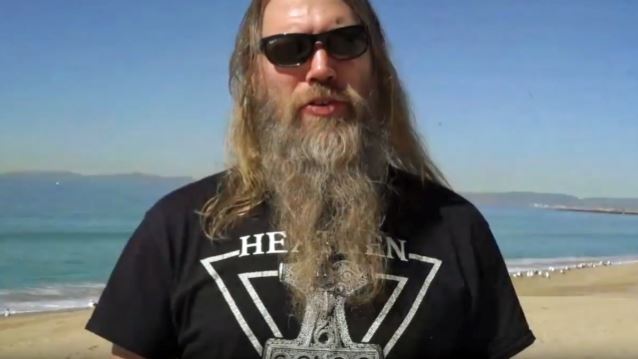 Speaking to Greg Prato of Songfacts, AMON AMARTH frontman Johan Hegg stated about "Jomsviking": "First of all, it's a concept album, which we've never done before. So there is a story that goes through the whole album chronologically, which also gives it a slightly more epic touch to the songs."

He continued: "We went about it differently: writing songs for the album was sort of like writing movie music. That gives it a lot more direction, which really lifts the whole thing, compared to older AMON AMARTH albums. There is more room for melodies and riffs, to take place without having to drop any of the aggressiveness, which I really enjoy. Also, we have a new drummer on the recording whose style is different from Fredrik's [Andersson, former AMON AMARTH drummer]. So there are a couple of major differences, but it still sounds very much like AMON AMARTH. I don't think any fans of AMON AMARTH are going to be disappointed. "

Asked about the album's storyline, Hegg said: "The story I have been thinking about writing for a long time, I just never really got around to it. It was sort of a private project for me, but for this album, I just had to start writing this script and show the guys the pieces and a concept album to make, and they said it was cool, so we went for it."

He added: "The story is very intriguing: it's a story about a man who commits a murder, and has to flee. And in doing so, he joins a group of Viking mercenaries called the Jomsvikings, and he becomes one of them. In short terms, that is kind of what happens. I based my story — which is the general story — on the saga of the Jomsvikings, which is an old Norse legend written around the 12th century. There is a lot of brutality and treachery and violence in it, but it's a pretty cool story."

By far AMON AMARTH's most ambitious project to date, "Jomsviking" is available for pre-order in various formats now at AmonAmarth.com, where fans can also view the video for the album's first single, "First Kill". Produced by Grupa 13 and directed by Darek Szermanowicz (BEHEMOTH), "First Kill" was filmed in Gohrweide (Germany) and Warsaw (Poland) and features a cinematic depiction of the violent, brutal lyrics, along with powerful live footage of the band performing with their full dragon head and pyro stage set.