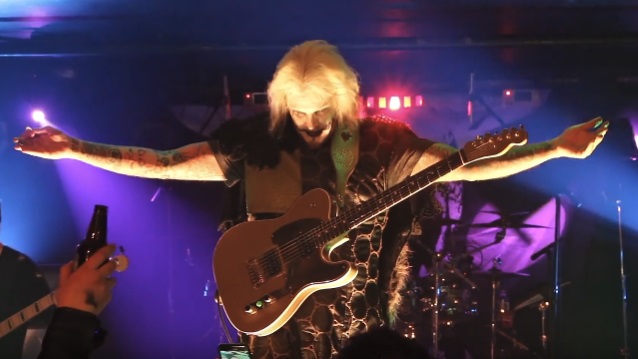 Quality multi-camera video footage of former MARILYN MANSON and current ROB ZOMBIE guitarist John 5 performing on February 17 at the Token Lounge in Westland, Michigan can be seen below (clip edited and produced by George S Pogacich).

As previously reported, John 5 will be joined by Ace Frehley (KISS) during his April 6 concert at the Whisky A Go Go in West Hollywood, California. Also scheduled to appear at the show are Nikki Sixx (MÖTLEY CRÜE),Scott Ian (ANTHRAX) and Sebastian Bach (SKID ROW),who will perform the MÖTLEY CRÜE classic "Shout At The Devil" with John 5 and his solo band THE CREATURES.

John 5 is touring in support of his concert album, "It's Alive!", which came out on January 25. The first live album released by John 5 and THE CREATURES — which includes Ian Ross on bass and Rodger Carter on drums — is also the first LP released by John 5 to be made available on vinyl.

John 5 told the New Jersey radio station 91.3 WTSR about "It's Alive!": "It just came together by accident. We were in Sellersville, Pennsylvania, and the guy was like, 'Hey, do you want to record your show?' I was, like, 'Sure.' We didn't move around like we did tonight. I said, 'Let's just concentrate — look at each other, stand still.' I even explained to the crowd — I said, 'Listen, we're recording tonight. That's why we're not jumping around. Just bear with us.' They loved it, and I kept that on the record, too. It was cool, and it came out great, and I'm very proud of it. That's why I wanted to put it out and tour it and celebrate it."