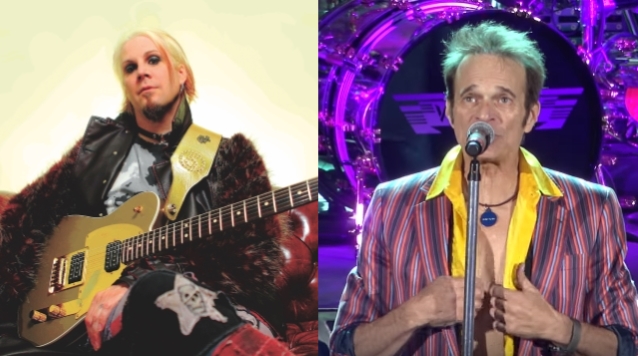 "People really like those songs, so I'm super happy about it," John 5 told AL.com in a new interview. "Because listen, you can't deny a good song and Dave writes good songs. He's written some of the most amazing songs of our lifetime, and Dave worked really hard on these lyrics. I'm not sure when it's going to come out or if it'll come out, but I hope it does.

"There's one I'll tell you about called 'Nothing Could Have Stopped Us', and it's unbelievable," he continued. "Being a VAN HALEN fan and a Dave Lee Roth fan, it's unbelievable because it's about Dave singing about VAN HALEN and what it was like. Really something special, so I really hope that comes out."

Asked if the rest of the unreleased David Lee Roth record in the same vein as the songs that have come out, which have a singer/songwriter sound, John 5 said: "He wanted to do this kind of a more California sessions type of thing. And he's such an artist, I was, like, 'Whatever you want to do, I'm there for you.' So it is that kind of vibe. But there's a lot of multi tracks and different acoustic parts that all work together. It's kind of orchestrated, if you will."

John 5 got his first big break playing on Roth's solo album, "DLR Band", before landing stints with Marilyn Manson and now Rob Zombie. His latest sessions with the iconic VAN HALEN frontman apparently took place at least seven years ago, with John 5 unveiling a snippet of the album during an interview with Masters Of Shred back in May 2019.

Two years ago, Roth was asked by Meltdown of the Detroit radio station WRIF if his LP with John 5 will be made available at some point. He responded: "It will. There's been a revision of things, and I can start making real plans and start marching into the future. And, of course, you'll start hearing that material. This is material that we wrote variously for me solo and for VAN HALEN, and it's quite a bank of stuff."