JOHN 5 Withdraws From YNGWIE MALMSTEEN U.S. Tour 'Out Of An Abundance Of Caution'

John 5 has pulled out of his previously announced U.S. tour as the support act for legendary Swedish guitarist Yngwie Malmsteen.

The trek, also featuring IMAGES OF EDEN and SUNLORD, was slated to kick off on November 16 in Atlanta, Georgia and conclude on December 18 in Houston, Texas.

John 5 announced his withdrawal from the tour in a statement posted on social media on Friday (October 20). The former MARILYN MANSON and current ROB ZOMBIE guitarist wrote: "Due to unforeseen circumstances and out of an abundance of caution I am sad to announce that i will no longer be joining Yngwie on the upcoming US tour.

"The health concerns for artists and their crew that come with travelling extensively from city to city during this time have meant that myself and my team feel this is the best course of action to keep everybody on my tour team safe and well.

"I am certain that these Yngwie shows will be amazing, as they always are. I'm sorry i won't be there to share my new music with you all. I'll be back out on the road as soon as is safe and possible."

John 5 will release his new solo album, "Sinner", on October 29 via Big Machine Records. The first single from the album, the epic "Qué Pasa", revolves around a distinctive vocal refrain. Originally built with a sample, John opted to have it reworked by Grammy-winning MEGADETH leader Dave Mustaine. 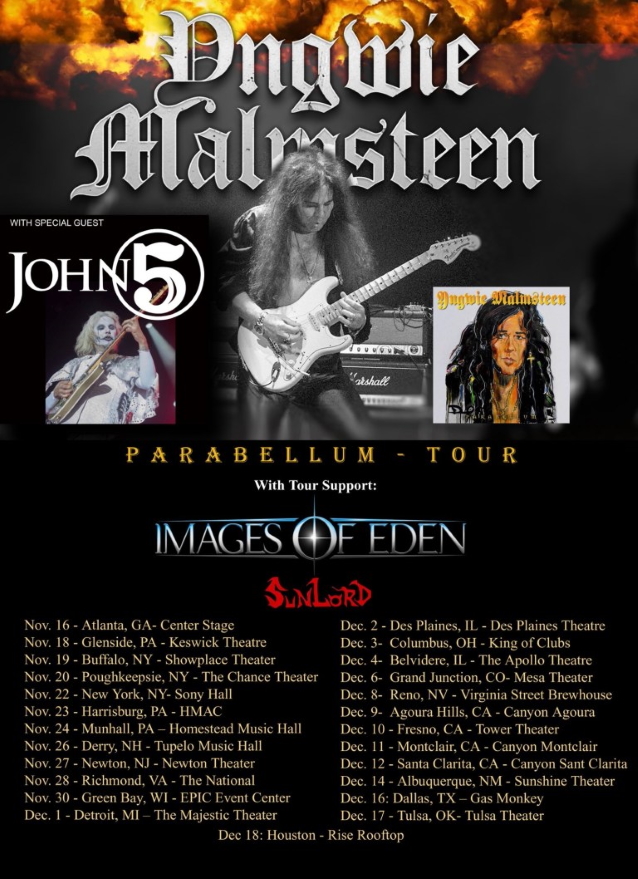