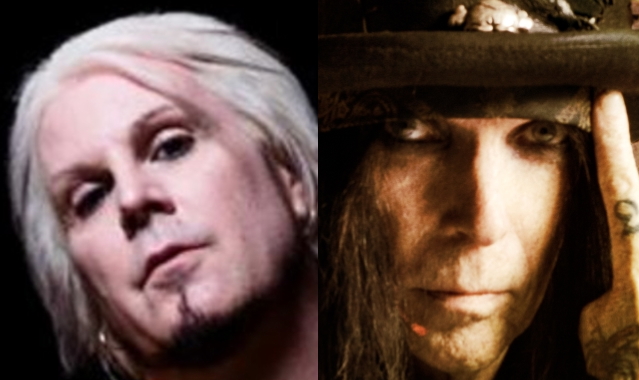 JOHN 5 Would Be 'A Great Choice' To Replace MICK MARS In MÖTLEY CRÜE, Says TRACII GUNS

Tracii Guns says that John 5 would be a "great choice" to replace Mick Mars in MÖTLEY CRÜE.

The L.A. GUNS axeman made the comment in response to a rumor — first reported by the Metal Sludge web site on October 7 — that John 5 would be stepping in for 71-year-old Mars, who has been struggling with chronic health conditions for years, on the 2023 leg of CRÜE's reunion tour.

Speculation about John 5's involvement with CRÜE gained strength after the longtime ROB ZOMBIE guitarist failed to appear with the shock rocker at this year's Aftershock festival in Sacramento. Rob was instead joined on stage by returning guitarist Mike Riggs for the first time since 2006.

Guns, who played with CRÜE bassist Nikki Sixx in a band called BRIDES OF DESTRUCTION two decades ago, took to his social media earlier today (Thursday, October 20) to write: "I have got a ton of messages about the rumor of Mick leaving MÖTLEY and what my opinion is if John 5 replaces him. First of all it's a rumor and who knows? But, if it's Time for Mick to tap out then that's his business. John 5 in my opinion is a great choice if the rumor is true."

John 5 has reportedly already dismissed the rumor of him touring with CRÜE. After a fan commented on an old photo of Mars and John 5 on the latter's Instagram, and asked whether the 52-year-old guitarist was indeed joining CRÜE on the road, John 5 replied in a since-deleted comment: "No, just a rumor."

John 5 spoke about his close friendship with Sixx in a 2019 interview with Outburn. At the time he said: "Nikki, he's my best friend. We love each other. He has inspired me and taught me so much about life in general. He's a phenomenal songwriter, lyricist, author, everything. He's always telling me to listen to this audio book or see this movie. He has a happy marriage, a happy life, a successful band he started from the ground up. He's one of the most inspiring people. He'll text me all the time to read something or try something. It's wonderful. He's a phenomenal photographer as well. I remember him telling me that he’s going to take bass lessons again and get into playing with his fingers. He was so dedicated. We worked on 'The Dirt' soundtrack together. When we went into the studio, he did it all with his fingers. [MÖTLEY CRÜE drummer] Tommy Lee was like, 'Look at you.' He's just such a dedicated person. I loved ['The Dirt'] movie; it was killer."

Back in 2016, Tracii told Philadelphia's 93.3 WMMR radio station that BRIDES OF DESTRUCTION fell apart after MÖTLEY CRÜE "got back together." But he went on to say that working with Nikki was "an amazing experience." He added: "I was the biggest MÖTLEY CRÜE fan; I loved 'Too Fast For Love' and 'Shout At The Devil' — they were really influential records in my life. When the BRIDES played live, we would do a few songs from each of those records at the end. We'd do the BRIDES album, 'cause it was only eight songs, so that set was thirty minutes, and then we'd do a mini L.A. GUNS set and a mini MÖTLEY CRÜE set. When we played [U.K.'s] Donington, playing [MÖTLEY CRÜE's] 'Live Wire' in front of ten, fifteen thousand people — or way more than that; whatever it was — it was the biggest adrenaline rush I've ever had in my life. It was wild, man — so cool."

Earlier today, it was announced that MÖTLEY CRÜE and DEF LEPPARD will go global in 2023 with their co-headline "The World Tour". Produced by Live Nation, the trek will kick off on February 18, 2023 at Foro Sol in Mexico City and include stops throughout Latin America before heading to Europe in May 2023.

I have got a ton of messages about the rumor of Mick leaving Motley and what my opinion is if John 5 replaces him. First...