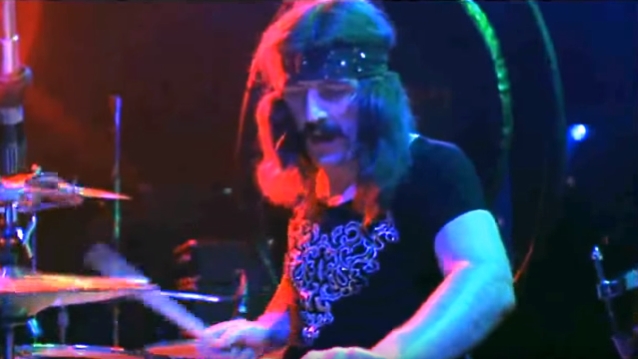 Plans to celebrate the life of Redditch, U.K.-born LED ZEPPELIN drummer John Bonham with a two-day music festival in the town have been scaled down.

The "John Bonham A Celebration II" event has been canceled after organizers decided they were not able to deliver the event to a standard that would do justice to the town's most famous musical son.

Organizers hoped to build on the success of the town center festival last year which was timed to coincide with the unveiling of the John Bonham memorial statue and helped raise more than £23,000 for the Teenage Cancer Trust. They hoped to establish an annual festival in memory of the rock legend known to fans worldwide as Bonzo.

More than a hundred tickets had already been sold for the event in September — to fans as far afield as the USA, Canada, Norway, Australia and even Turkmenistan. Full refunds have already been paid.

Eight acts had been booked with legendary blues singer Maggie Bell among the headliners. The decision to cancel was taken after consultation with John Bonham's sister Debbie, whose band performed at last year's event.

Promoter Ros Sidaway said: "We can only apologize to people who have been inconvenienced and were looking forward to what promised to be another memorable event. I'm sure we have made the right decision in cancelling this year with a view to providing something even better in future. We were doing this in the name of one of the all-time greats of rock music and it would be wrong to deliver anything less than the best. John's family recognize this, and we wouldn't want to embarrass them or sell his memory short in any way. It's encouraging that we know people are prepared to travel from all over the world to honor his memory in his hometown."

CODA, the LED ZEPPELIN tribute act which was due to close the festival on Saturday, September 21, will now play at the nearby Queen's Head and the Black Tap will also host live music.

The organizers are hoping to put on a full-scale tribute next year — the 40th anniversary of Bonzo's death. Anyone locally interested in joining the organizing group to help with this should contact Ros via the web site www.JohnBonhamAC.com as soon as possible.