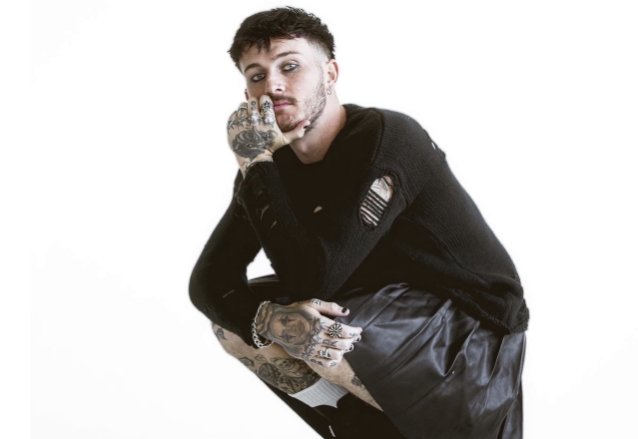 Jager Henry Bonham, the grandson of iconic LED ZEPPELIN drummer John Bonham and son of Jason Bonham, has released his latest single "Hate Me", an angsty, relatable track dealing with loving the girl who hates him.

"I was in the studio one night after a long day," says Henry. "And my producer Omer Biton and I started to make a beat with some drums and bass. All of a sudden the day had just started turning into lyrics."

Henry is a second-generation musician with a lot to live up to. Instead of walking the same path of drums as his father and grandfather, Jager chose a slightly different path musically.

"My voice is my instrument," he elaborates. "My genre is a little different too, but it's all rock 'n' roll."

Why did Jager decide against using his well-known Bonham last name for his music project? In his own words, "I was always talked about due to my last name, so I thought why not switch it up a little and just basically took my last name and replaced it with my middle name and it had a nice ring to it."

Henry will be headlining the Viper Room in West Hollywood on the same day of release and performing at the Greek Theatre on October 14.

This past February, Henry teamed up with KORN's Ray Luzier on a single called "Love Yourself". The track was described at the time as "a cathartic coming-of-age tale about growing up and learning to be easier on yourself."

Last year, Jason told Forbes about his son: "My son, he's got that thing I remember having when I was 23 — that 'I'm gonna be the greatest there is!' thing. Before the world has really sucked it out of you. When you think that everything you do is amazing and everyone should listen to it. He's in that stage of his life where he's the coolest dude in the world. And the great thing about him is his work ethic. When he really wants something, he's amazing."