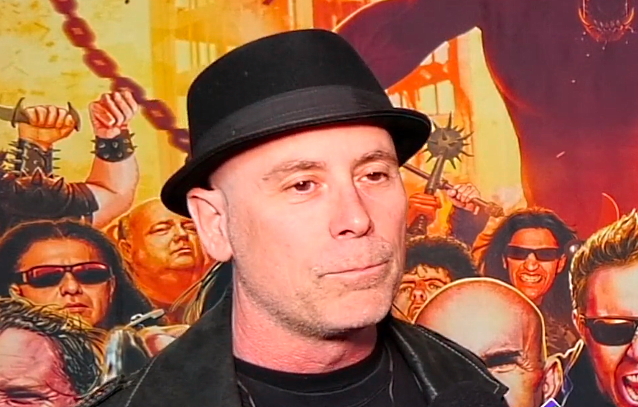 Prior to the Ronnie James Dio Stand Up And Shout Cancer Fund's 10th Memorial Awards Gala, which took place at The Avalon in Hollywood, California on February 20, ARMORED SAINT singer John Bush spoke to "The Blairing Out With Eric Blair Show" about the progress of the recording sessions for the band's new album, tentatively due in late 2020 via Metal Blade Records. The follow-up to 2015's "Win Hands Down" is being tracked with veteran producer/engineer Bill Metoyer and bassist/producer Joey Vera at the helm.

Bush said: "We're almost done. We'll probably start mixing in about two weeks. We don't have an official title yet, so I don't wanna say anything that's gonna be premature. But I think it's gonna be an incredible record. I'm really proud of all the tunes that we've written, because it sounds like an ARMORED SAINT record for 2020.

"We always take the foundation of the origins of what this band is, but we always wanna push it and grow and try to push the envelopes and challenge ourselves as songwriters," he continued. "So, I think we do that. We'll put out this record — hopefully it'll come out in maybe late summer, early fall, realistically — and then we'll do some shows."

Earlier in the month, Bush revealed that ARMORED SAINT's new album will once again be mixed by Jay Ruston (STONE SOUR, STEEL PANTHER, AMON AMARTH), who also worked on "Win Hands Down".

Among the tracks set to appear on ARMORED SAINT's new LP are "My Jurisdiction" (described by Bush as "a little AEROSMITH-y), "Lone Wolf" and possible first single and video, "Standing On The Shoulders Of Giants", which is "a rad tune" with "a lot of moody changes in it and a big chorus," according to John.

More recently, Bush and Vera have been working on a song called "Unfair" which the singer described as "a slower song, but very, very moody. It's a different type of ballad, if you will, for ARMORED SAINT. It's awesome," he said.

"Win Hands Down" was released in June 2015 via Metal Blade.

ARMORED SAINT's latest release was a live album, "Carpe Noctum", which came out in February 2017.