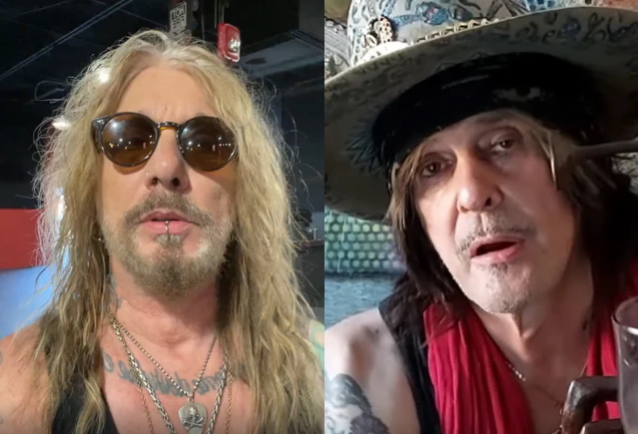 John Corabi says that HANOI ROCKS guitarist Andy McCoy almost hit him with his cane because of his association with MÖTLEY CRÜE.

McCoy has repeatedly expressed his displeasure about MÖTLEY CRÜE over their account of HANOI drummer Nicholas "Razzle" Dingley's death and CRÜE bassist Nikki Sixx's heroin overdose, as published in CRÜE's best-selling band autobiography, "The Dirt: Confessions Of The World's Most Notorious Rock Band" and "The Dirt" biopic.

Razzle was killed and two other people were seriously injured when CRÜE singer Vince Neil, whose blood alcohol level was 0.17, which was over the legal limit, smashed his car into another vehicle in Redondo Beach, California in December 1984.

Corabi joined MÖTLEY CRÜE in 1992 as the replacement for Neil. With Corabi on vocals, MÖTLEY CRÜE released one critically acclaimed full-length CD before Neil returned to the fold in 1997.

Corabi reflected on his near-altercation with McCoy in a new interview with Artists On Record Starring ADIKA Live! He said (as transcribed by BLABBERMOUTH.NET): "I met Andy the first time [while I was playing guitar] with RATT. We played — it was a huge club in Helsinki. And afterwards, Andy took me and [RATT drummer Bobby] Blotzer out to a nightclub, and it was, like… I love Andy, but holy shit — he's a whole other [out there]. So, we hung out and everything was great. And then a couple of years later, I went back to a Swedish rock festival, and I didn't realize it but a very good friend of mine, Conny Bloom, who plays guitar with the ELECTRIC BOYS, he was playing with HANOI ROCKS. So I was kind of walking by, and Conny [called me over], so I went over and I sat at the table that they were sitting at. And Andy was just kind of staring at me. I had a red scarf — I just kind of had it tied around the top of my head — and he took offense to me wearing the scarf, 'cause it was, like, 'That's my thing.' So somebody said, 'Oh, Andy, this is John. He sang with MÖTLEY CRÜE.' And I thought Andy was seriously gonna pummel me to death. He had his cane and he came at me with his fucking cane and he was, like, literally wanting to hit me with the cane. So I grabbed the cane, and then his [then-wife] Angela and Conny came over… He had this cane with a skull on top of it. It was a black cane. Honestly, I was kind of pissed. I'm, like, 'What the fuck is your problem, dude? I've already met you before.' And I'm holding on to the cane and I'm going, 'he doesn't have a fucking clue. He's out to lunch.' And I'm sitting there, like, 'Okay.' So I kind of let go of the cane. Conny came over, Angela came over, and they were, like, 'Dude, that's not Vince. That's John. Different singer.' And he kind of settled down. But I was, like, 'Dude, seriously, I'll fucking beat you to death with your own cane. Stop with this shit.'"

Corabi went on to say that he sympathized with McCoy over his anger at CRÜE and how they handled Razzle's death.

"His fucking beef, and I can't say that I blame him, was the fact that MÖTLEY had just released [a box set titled] 'Music To Crash Your Car To', and he was not having it," John recalled. "And he sat there in his very difficult-to-understand English, he sat there and he was, like, 'I think that's fucking bullshit. Nikki Sixx and those guys are nothing but a bunch of scumbags.' And he was just going on and on and on about how he felt it was distasteful. Not only did they call it 'Music To Crash Your Car To', but there was a volume one and then they turned around and did a volume two. So it was like a double shove up Andy's and Michael's [Monroe, HANOI ROCKS singer] ass. And they weren't happy about it, and I can't say that I blame 'em. I was, like, 'Okay, dude. I had nothing to do with that. Here's when I was in the band. I'm out. You've got a whole other issue with those guys.' … When he explained himself, I was, like, 'Hey, dude.' I gave him a hug and I'm, like, 'I totally understand your displeasure right now with MÖTLEY CRÜE. I get it.' I didn't have an argument. I can't argue. His rationale made sense to me. It made sense. So I didn't make a stink about it."

McCoy spoke about CRÜE's decision to title their box set "Music To Crash Your Car To" during a recent appearance on the "Waste Some Time With Jason Green" video podcast. He said: "I thought, and Michael Monroe thought, [that] was the tackiest title, thinking about what had happened. That was in real tacky, bad taste. If you're European like me, it's something you don't do. You respect other people. You just don't wanna make a buck for yourself. You respect other people."

In a 2005 interview with Metal Express, Andy called the description of the events surrounding the tragic car accident caused by Neil in CRÜE's autobiography "bullshit" and "pure lies."

For his role in the Redondo Beach crash, Vince was charged with vehicular manslaughter and driving under the influence of alcohol. His blood alcohol level was 0.17, which was over the legal limit. Neil served half of a 30-day jail sentence, received five years probation and had to pay $2.6 million in restitution, as well as perform 200 hours of community service.

Two years ago, Monroe told "The Classic Metal Show" that he was "not interested at all" in seeing "The Dirt". Monroe went on to say that the car accident "certainly destroyed a lot of people's lives. I've never blamed anybody — you can't blame anybody for an accident — but a lot of people's lives were shattered, "he said. "As well as the two teenagers who got paralyzed in the accident; I've heard that there was no mention of them either [in the film].

"It's a depressing subject and it's always like opening a can of worms," Michael continued. "And I just don't wanna get into all that. It's just useless."

Back in 2004, Monroe slammed MÖTLEY CRÜE for the band's decision to title a box set "Music To Crash Your Car To", calling the move beyond disrespectful and referring to Sixx as "shallow," "ignorant" and "stupid". "The 'Mostly Crude' gotta be as dumb as they are to have done that," he told Metal Sludge. "I'm not only talking about Razzle, but also for the other families involved in the accident... As we've previously stated: The most tasteless and murderous gimmick to cash in on the past we've ever heard of. There's nothing 'cool' or 'funny' about death or winding up a paraplegic for life. How low can you go? I'd say this gave bad taste a bad name."

Three years later, Monroe publicly apologized to Sixx, saying that his "unflattering comments" about the bassist were "really childish and stupid." He explained: "I just took it a bit personally when they called their album at the time 'Music to Crash Your Car To'. I thought it was inappropriate since it came across as if they were making fun of the accident, which I'm sure was not their intention."

In 2011, Monroe gave Sleaze Roxx his take on what happened that night: "There was an accident, and unfortunately our drummer was killed. As far as Vince Neil, I have nothing to say. It was an accident. What happened happened, and it can't be changed. Everybody suffered from the whole thing."

Even though HANOI ROCKS was formed in Finland, their trashy, hedonistic, decadent hard rock/pop-metal boogie influenced many Los Angeles acts, including CRÜE and GUNS N' ROSES.