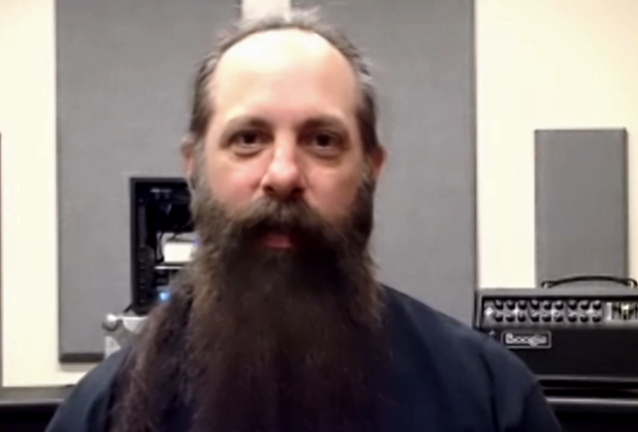 DREAM THEATER guitarist John Petrucci spoke to Germany's Thomann about the writing and recording process for the band's upcoming follow-up to 2019's "Distance Over Time" album. He said (as transcribed by BLABBERMOUTH.NET): "We just wrapped recording of that. We had been working on that since October. And I am super excited about it. It's not gonna come out till later this year. We don't have any release-date information yet, obviously, as we do, we'll let everybody know. But I am just really, really excited.

"The pandemic has been hard on a lot of people in the world, and as far as the way it's affected musicians, everybody wants to play — everybody's pent up; there's no live performances," he continued. "So I feel like, with all these records that we're doing in the studio, the DREAM THEATER guys came to play. So the record [is] filled with energy and excitement and positivity. I'm excited about it. I can't wait for people to hear that."

Earlier in the month, DREAM THEATER keyboardist Jordan Rudess told Canada's The Metal Voice that he and his bandmates "got a great start in writing" the group's new LP. "Now we're gonna be mixing it and mastering it and all the good stuff. I'm super excited about it. It sounds really, really cool. People are gonna love it. It's not coming out for a while, so there's not too much one can say about it at this point other than you guys are really in for a treat."

DREAM THEATER recently released its ninth career live album, "Distant Memories - Live In London". Recorded at DREAM THEATER's sold-out show at the Apollo Theatre in London, the live release documents the band's world tour in support of "Distance Over Time" and the 20th anniversary of their seminal concept album "Metropolis Part 2 - Scenes From A Memory".