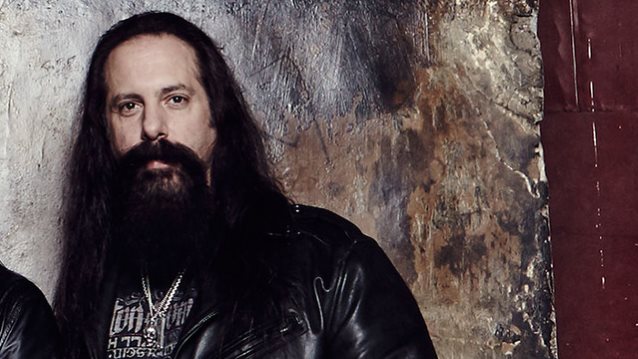 John Petrucci has hinted that DREAM THEATER's next album will be musically inspired by the band's current "Images, Words & Beyond" tour, which sees the pioneering group celebrating the 25th anniversary of its milestone RIAA-gold-certified album "Images And Words".

The guitarist, who will take part in the 2018 installment of the "G3" tour alongside DEF LEPPARD guitarist Phil Collen and tour founder Joe Satriani, spoke about DREAM THEATER's future plans during an appearance on the "Trunk Nation" show on SiriusXM channel Volume.

Asked when DREAM THEATER will get around to working on the follow-up to 2016's concept album "The Astonishing", Petrucci said: "Those two 'G3' tours [in Europe and the United States] will take me to the spring of next year, believe it or not, so we won't be able to get something going until some point next year and then we'll have a release the following year. But we kind of already know the direction of what we wanna do. We're really excited. Yeah, but it won't be for a while yet."

Pressed for some "hints" and "nuggets" about a possible musical direction for DREAM THEATER's next album, Petrucci said: "I think that reconnecting with the music from the era that we're playing now and kind of where our headspace was in the early '90s and everything, it's kind of, I guess, for lack of a better word, reconnected us with the musical style of that period of DREAM THEATER. So it's been really interesting talking about how we're gonna approach the next record and everything. So, yeah, we're psyched."

DREAM THEATER keyboardist Jordan Rudess told the Venezuelan chapter of Dream Theater World last year that the band's next record would see him and his bandmates going in a different direction from "The Astonishing", which was criticized by some fans for being too ambitious in scope. "I don't think it's a question of necessarily topping it," Jordan said. "I think that this is a particular creative adventure for us, to write something that was a concept album, very much like a musical or a rock opera. I think that whatever we decide to do next will be something obviously very different. And we'll invest our energies into that when it comes to that. Obviously, it's not gonna be another concept album — I just don't think that would be necessarily the best thing to do — but it will be some creative adventure that we'll feel like we want to put our energies behind."