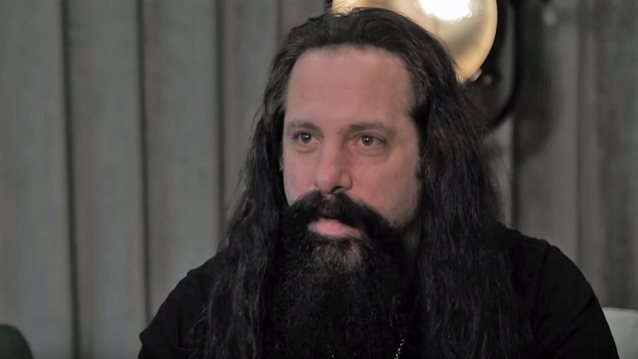 Progressive metal giants DREAM THEATER recently kicked off a fall North American headline tour during which they are performing their widely acclaimed double concept album "The Astonishing" in immersive and interactive settings for a unique and unparalleled live experience.

Speaking about the band's decision to play "The Astonishing" from beginning to end, DREAM THEATER guitarist John Petrucci told "Trunk Nation", Eddie Trunk's new show on SiriusXM channel Volume (106): "What we did is, because we came out with this double concept album that's sort of a rock opera, we wanted to make the touring experience of it really special. So we did an 'Evening With' where we played the album in its entirety. And, as a result, we've gotten to play some of the coolest and most special venues all around the world, 'cause we wanted to make the event special. So, Radio City [Music Hall] in New York, and the Frankfurt opera house and the Palladium on London's West End — things like this."

He continued: "We've been touring since February in Europe and U.S. and South America. And now this is our final, sort of, continuation of the U.S. part where we're trying to hit some of the places that we didn't get to in the spring. It's kind of a perk of doing this show the way we're doing it — that we're getting to play in all these really, really cool places. As a performer, it's really special to be in those venues."

According to Petrucci, once the last round of "The Astonishing Live" tour dates is completed, DREAM THEATER will start incorporating some of its back catalog into the band's setlist.

"Our final U.S. run will be done beginning of December — I think the last show is December 5, or something like that," he said. "So if you haven't seen 'The Astonishing Live', this is your last opportunity to see it in the U.S. And then, moving forward, we most likely will change things up. Again, this is just us trying to get to… There's a whole bunch of territories that we didn't hit in the spring, so we'll be going down South to Florida and North Carolina, Texas, out in the Midwest and out West as well. And those will be the final opportunities to see 'The Astonishing Live'. If you haven't seen it, I suggest you see it, 'cause it's a real special show for us, very unique, and, again, the final time we're gonna be touring this in the U.S."

Petrucci also credited DREAM THEATER fans for making it possible for the band to do something very few artists are able to do — perform a set of all new music in a setting that is not usually associated with rock acts.

"We are really, really lucky," he said. "I mean, you have to take chances with art — that's what it's all about — and you put yourself out there. And I give our fans so much credit for coming to a show. It's all new music, there's no other… There's no encores with 'Pull Me Under' or anything, it's just you're going, you're seeing this thing that's a two-act rock opera in a place where you're sitting down and probably eating popcorn and watching it; it's a very different experience. And the fact that we've gotten the support that we've had, it is a testament to our fanbase. DREAM THEATER fans are unlike any other and really dedicated and devoted and open, I think, to new ideas. And that's why this has been such a success for us. So we're really thankful."