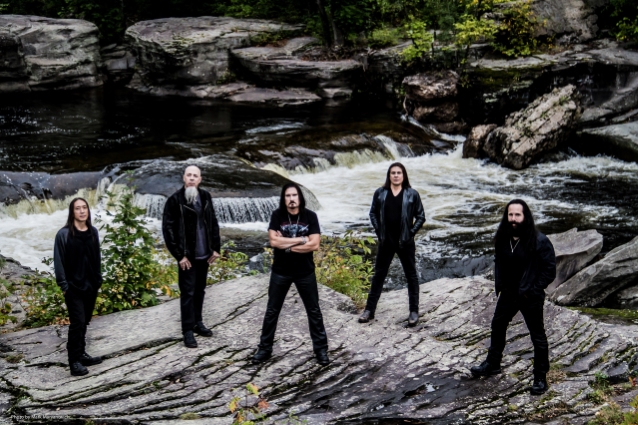 Jave Patterson of Two Doods Review recently conducted an interview with guitarist John Petrucci of progressive metal giants DREAM THEATER about the band's new studio album, "Distance Over Time". You can listen to the entire chat below. A few excerpts follow (transcribed by BLABBERMOUTH.NET).

On whether he thought DREAM THEATER would be able to sustain such a long period of success when the band was starting out:

John: "You know, it's crazy. When you're younger, it's like you don't think that far into the future. We worshiped bands like RUSH and IRON MAIDEN, so we saw what they were doing. We'd go to their shows and see how they interacted with the fans and watch the live DVDs or videos back then. It's like we had tunnel vision. That's just what we wanted to do. That's what we were going to do. We tried to take everything we did to take us in that direction. But it is crazy. Our first album ['When Day And Dream Unite'] came out 30 years ago this year. That's just insane. That's insane to me."

On drummer Mike Mangini's songwriting contributions to "Distance Over Time":

John: "The way that we set everything up this time around — we took a guys' trip. We went away together. We rented this big property and it was a converted barn that was a studio then a house where we all hung out and stayed in. It was just the environment was incredibly inclusive and Mike came in, as was discussed, that everybody was going to be involved. He came in with a ton of ideas. He even contributed a song lyric for the first time since he's been in the band. He absolutely contributed one hundred percent in the songwriting. It was really great to finally get his perspective and hear his thoughts and have his musical input. I think the album is better for it. The outcome is a more of a collective of us doing it together."

On the whereabouts of original DREAM THEATER keyboardist Kevin Moore, who left the band in 1994, but shortly reappeared as a solo artist under CHROMA KEY, then launched OSI with FATES WARNING guitarist Jim Matheos:

John: "Rumor has it that he's some sort of doctor or something. That's the last I heard. That he got into — I don't know if it's holistic medicine or something. I haven't talked to him in ages and ages, which is unfortunate. We actually grew up together. We were best friends. After he left the band, he went his own way. Early on after he split, we kept in touch a bit, but I've not heard from him in a long time. The reason I know this is because some of my high school friends stay in touch and our parents. We literally grew up together — our parents are friends. I'll hear from my mom every so often [about Moore]. Other than that, it's kind of sad I've lost touch. I haven't talked to him in a long time."

John: "There's some things like that. As our career goes on, we're really fortunate enough to be able to play in all different parts in the world and go to places like India and UAE [United Arab Emirates] and places that a lot of bands don't go to too often and that's amazing. One of the countries in the U.K., in the city of London, there's a venue that has eluded us, which is the Royal Albert Hall. We always talk about how we've played Wembley and everywhere else, but we haven't played there. That's on our bucket list. That's kind of the Radio City of London."

On whether "Pull Me Under" is his least favorite DREAM THEATER song to play live:

John: "It's funny because 'Pull Me Under' was the only time we had a radio, or I guess a rock-radio hit. Other than that, we're kind of not a singles band, so we don't have all these songs that we have to kind of play to death. I think that DREAM THEATER fans actually appreciate when we sort dig in and play material that maybe we don't play too often. It's kind of like the RUSH mentality. Although RUSH did have a lot of really successful singles. Yeah, so it never got to that point. Honestly, I enjoy playing 'Pull Me Under' just as much as the other songs. It's a fun song. And the audience gets into it."