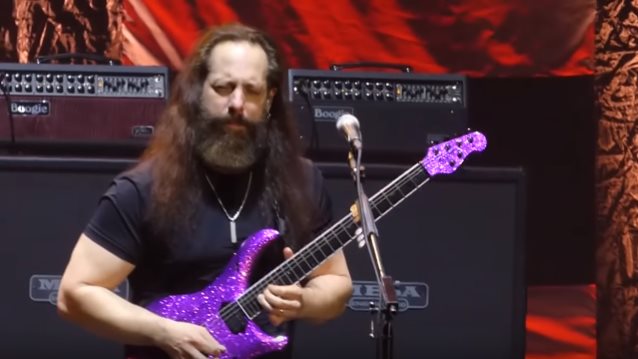 DREAM THEATER guitarist John Petrucci spoke to Germany's Gitarre & Bass about the twenty-fifth anniversary of the band's breakthrough album "Images And Words", which the group is performing in its entirety on the "Images, Words & Beyond" tour. You can now watch the chat below.

Asked if he and his bandmates had a feeling during the recording process that "Images And Words" would turn out to be such an important album for them, Petrucci said: "Well, we had no idea that it would end up doing what it did for us — basically launch our touring and international career as a band. That's really what it did. We had no idea, no. In fact, we didn't even write songs, really, that had that potential in that atmosphere, because all the things that were being played on the radio sounded nothing like DREAM THEATER, so we didn't really think we had a chance. They were playing NIRVANA and PEARL JAM. There was still some kind of '80-ish bands around and stuff. Even the band that David Prater, the producer, had done right before us was this band FIREHOUSE, and they were like a big pop-metal ballad band. So we didn't think we had any place. But we did feel really good about how the album came out. We felt very proud of it. We knew that it sounded good. I remember feeling really proud anytime I would play it for somebody. Like, 'Oh, you have to hear this. Check it out.' And the reaction was always, 'Wow! That sounds really good.' So we knew there was something there, but we had no idea what it would do for us."

Asked if "Pull Me Under" is the most important song of DREAM THEATER's career, John said: "Yeah. Probably. Yeah. If you think about what it did for us as far as the future is concerned, it really put up on the map. It enabled us to go from local guys driving around in a van, playing to a few people in clubs to an international touring band with this whole long and very busy and productive career. And who knows? Without that kind of initial spark, we may never have been able to be as successful as we have. I mean, who knows? Maybe we would have. I don't know. But it certainly, certainly helped. Big time."

DREAM THEATER is planning to bring the "Images, Words & Beyond" tour to North America in the fall. Each performance will see the iconic progressive rock band delivering a live set of "Images And Words" in its entirety along with fan favorites from their renowned catalogue.