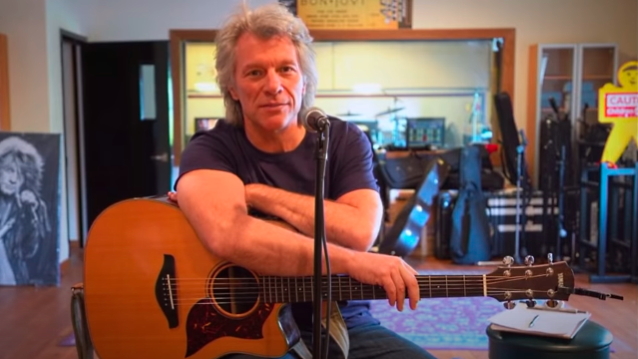 Jon Bon Jovi performed a new song called "Do What You Can" during last night's (April 22) "Jersey 4 Jersey", a star-studded one-night benefit show on behalf of the New Jersey Pandemic Relief Fund (NJPRF) to fight the medical, social and economic impact of COVID-19 on New Jersey's most vulnerable communities. Check out video of his performance below. Also scheduled to perform during the fundraiser were some of New Jersey's biggest celebrities, including Tony Bennett, Halsey and Bruce Springsteen.

Jon said that he wrote "Do What You Can" "about the situation that we're in," referring to the coronavirus pandemic that is sweeping the world.

All online proceeds received from "Jersey 4 Jersey" go directly to the NJPRF and help in the battle against the pandemic's impact on New Jersey.

More than 2.6 million coronavirus cases have been reported worldwide and more than 184,000 deaths so far, putting public health systems and emergency services under immense pressure.

As previously reported, BON JOVI's new album, "Bon Jovi: 2020", which was originally set for a May 15 release, has now been delayed until the fall. The band's U.S. tour in support of the LP, which was scheduled to launch in June, has been canceled.

"Bon Jovi 2020" makes a wry reference to an election year with the title, and album art featuring an American flag in the reflection of a pensive Jon Bon Jovi's sunglasses.

Jon previously said about the album's title: "The meaning behind it — there's the obvious. It's an election year, and I couldn't do any worse. And I also have clear vision. 'This House Is Not For Sale' dealt with a lot of personal matters, and now it's behind us. So, '2020' — of course, it's an election year, but more importantly, it's that I have clear vision going forward."