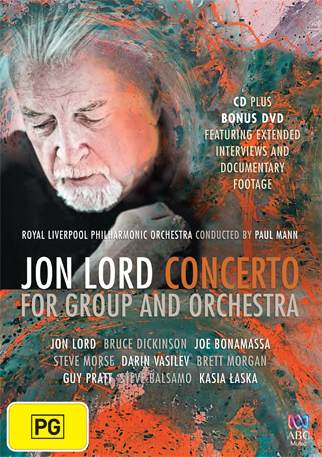 JON LORD: Promo Video For Documentary From 'Concerto For Group And Orchestra' DVD

A promotional video for the expanded edition of late DEEP PURPLE keyboardist Jon Lord's Concerto For Group And Orchestra — which includes a CD, documentary DVD, and 80-page book — can be seen below. The set will be released on December 7.

The book contains Marco de Goeij's essay on how he struggled with his recreation of the Concerto and his initial meeting with Jon while he was on tour with DEEP PURPLE. Marco de Goeij caught him outside his hotel in Rotterdam and remembers the crucial moment, when Jon first heard about the reconstructed score: "Jon decided to have a look at my work right away. For the next two hours we sat in the lobby of the hotel discussing the score. With every turn of a page new thoughts and memories surfaced and at some points Jon could see his own handwriting coming through the printed score, remembering what the manuscript had looked like when he wrote it, complete with the stains caused by erasing mistakes. As he studied the work, it slowly dawned on him that it would now be possible to play the piece again. He grabbed my arm, asking, 'Are you real? Am I dreaming?'"

The DVD contains "The Making Of Concerto for Group and Orchestra", complete with unseen footage from the recording sessions in Liverpool and at Abbey Road Studios, along with filmed interviews with Paul Mann and Marco de Goeij.

"Over these last years since leaving DEEP PURPLE, I've played it over 30 times with different orchestras and conductors all over the world, and, of course, in 2000 I did it well over 30 times with PURPLE on the Concerto tour, so I've been honing the piece live on stage and I've had the opportunity to change things in the score that weren't sounding quite right," Lord said in a May 2011 interview. "It is therefore a marvelous and exciting prospect to have the definitive recording of the definitive version of the score."

He added, "I'm thrilled to have the Royal Liverpool Philharmonic on board. I have immensely enjoyed working with them on several occasions since recording Durham Concerto with them in 2007. They are a wonderful group of players, and with Paul Mann conducting — a dear friend and a man who knows the score inside out — there couldn't be a better conductor and orchestra for this studio recording of the Concerto."

On July 16, Lord passed away in London at the age of 71. This album is a joyful testament of a great musician and fantastic man.

"His dignity and graciousness touched us all," the surviving members of DEEP PURPLE said in a statement following Lord's passing. "His music was an inspiration and took us to places beyond our imagination… A truly great man. We humbly express our eternal love and great respect."

Jon Lord's Concerto For Group And Orchestra was released on September 25 via Eagle Rock Entertainment.