ICED EARTH founder, songwriter, guitarist and producer Jon Schaffer has released "A Narrative Soundscape", an audio CD of 15 tracks that was originally made available with the purchase of the deluxe edition of his first-ever book "Wicked Words And Epic Tales". These recordings are a completely re-imagined delivery of the lyrics of ICED EARTH songs created exclusively for this release. Longtime collaborator Jim Morris worked with Schaffer on these versions.

"Wicked Words And Epic Tales" is a collection of lyrics, interviews and pages of artwork that Schaffer's work has inspired throughout the years. The book is an anthology of lyrics from Schaffer that span his 35 years in making music in various projects, including ICED EARTH, DEMONS & WIZARDS, SONS OF LIBERTY and PURGATORY. The book comes in two unique covers: one created by Jonboy Meyers and another by Jim Balent and Roy Young, and is over 200 pages. The coffee-table art book also features original drawings from some of the most notable artists, including Todd McFarlane, Greg Capullo, Monte Moore and numerous others.

"I wanted to put something together that would be a truly unique experience not only for the fans of my bands, but for newcomers as well," Schaffer previously said.

"Wicked Words And Epic Tales" was the debut release from Schaffer's publishing company Wicked Words, LLC and was the first of many original concepts he planned for future release.

Released on January 21 via Ravencraft Productions, "A Narrative Soundscape" features the following tracks:

Last April, Schaffer pleaded guilty to his role in the January 6, 2021 U.S. Capitol riot. As part of the plea deal, Jon entered into a cooperation agreement with the government.

Following the initial reports that Schaffer was involved in the riot, his ICED EARTH bandmates distanced themselves from his actions. Singer Stu Block and bassist Luke Appleton later posted separate statements on social media announcing their resignations. BLIND GUARDIAN frontman Hansi Kürsch also quit DEMONS & WIZARDS, his long-running project with Schaffer. The allegations also apparently affected Schaffer's relationship with his longtime record label Century Media, which had released albums from both ICED EARTH and DEMONS & WIZARDS. As of mid-January 2021, the Century Media artist roster page did not list either band.

Last month, a lawsuit was filed in federal court in Washington, D.C. accusing 31 members of Oath Keepers and the Proud Boys — including Schaffer — of "conspiring to terrorize the District" on January 6, 2021, calling their actions "a coordinated act of domestic terrorism." According to CNN, the lawsuit cites the Ku Klux Klan Act of 1871, a federal law created after the Civil War to protect civil rights and, as District of Columbia Attorney General Karl Racine noted, "to protect against vigilantes and insurrectionists." 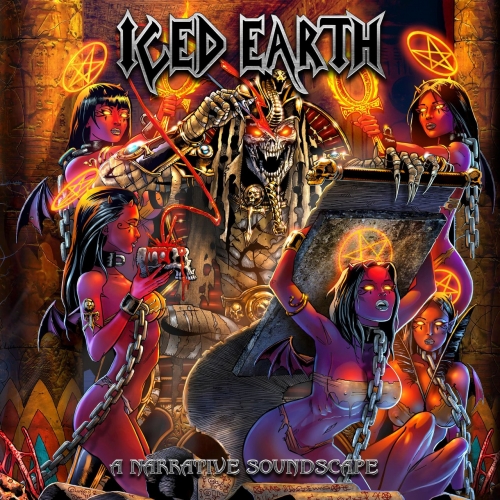