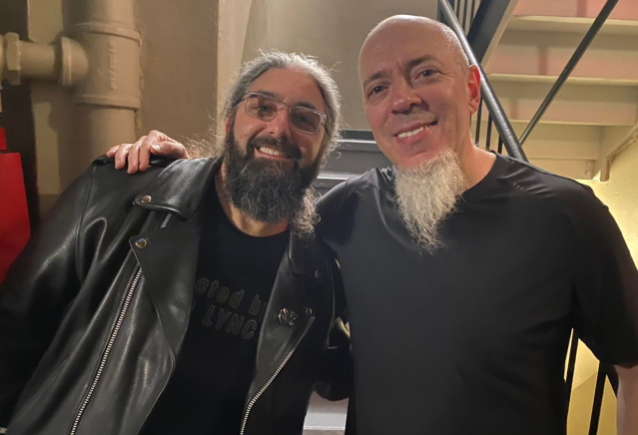 Asked in a new interview with Pete Pardo of Sea Of Tranquility what it was like for him to see Portnoy at the New York concert, DREAM THEATER keyboardist Jordan Rudess said (as transcribed by BLABBERMOUTH.NET): "Well, Mike and I have been friends [in the years since his departure]. Nothing really interrupted that. There was definitely a rough period, but that's obvious. It was great. It was brave of him. I'm sure it took some — I don't know what the word is — some courage, or whatever, to put himself in that position, 'cause it's a little awkward, especially 'cause there were some different guys with different situations going on, different relationships. So he was, like, 'I'm going,' and I think it's awesome that he did that. And it meant a lot — it meant a lot to everybody. It meant a lot to all of us, and it also managed to smooth out some of the relationships, as everybody knows; you see everything online. But it was great to see him. And I'm so glad he came. And it must be cool to go see a DREAM THEATER show. [Laughs]"

Last month, LaBrie told Sonic Perspectives that it was "great" to reconnect with Portnoy at the New York show. "The thing is that you get to a point in life where you've gotta… You can't carry around that. Don't carry around hate; don't carry around negativity," LaBrie said. "We carried it around far too long, as far as I'm concerned, and it didn't serve any purpose; it just served frickin' division. It was very divisive and very damaging.

Portnoy was a guest on DREAM THEATER guitarist John Petrucci's second solo album, "Terminal Velocity", which was released in August 2020 via Sound Mind Music/The Orchard. The effort marked the first time Petrucci and Portnoy recorded together in over a decade, as well as their first time playing together since Portnoy departed DREAM THEATER.

After 36 years, I finally got to see my 1st Dream Theater show last night! 🤣 It was a wonderful evening and it was such...