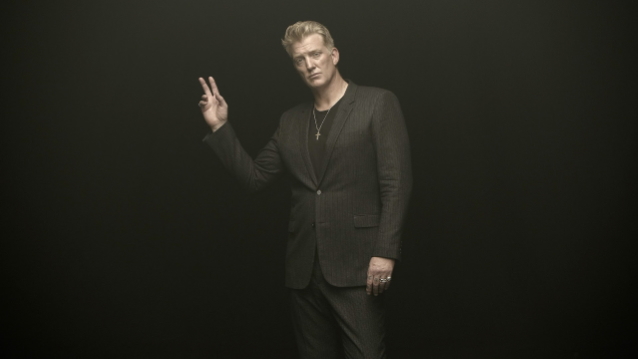 According to Variety, QUEENS OF THE STONE AGE frontman Josh Homme and his estranged wife, THE DISTILLERS' Brody Dalle, have listed their Mediterranean-style Hollywood Hills home for $4.75 million. They bought the 4,554-square-foot, four-bedroom and 5.5-bath property in 2012 for $2.5 million.

Homme and Dalle also owned a home in Palm Desert, California that was recently sold for $976,000, a bit under the $990,000 they paid for the property a bit more than eleven years earlier.

In November 2019, Dalle filed for separation from Homme after 12 years of marriage.

The QUEENS OF THE STONE AGE rocker and Dalle got married in 2007 and have three children, 14-year-old daughter Camille, 9-year-old son Orrin, and 4-year-old son Wolf.

In a 2018 interview with The Sydney Morning Herald, Homme said that he first met Brody when she was 17 and he was 23. "It was her first day in the U.S. after relocating from Melbourne and I was playing guitar in the SCREAMING TREES," he recalled. "She came up to me backstage and asked if I was in KYUSS. We talked for an hour and a half and I never forgot her.

"I didn't like her ex, so I lied and said I had made out with her in the hope that he would find out. I didn't see her again until seven years later.

"Our bands played the Big Day Out in Australia in 2003. I was with someone in a casual way but had my eye out for Brody and saw her walking past. I pretended I didn't see her and tried to be cool. From that moment, we clicked and it was on. We've been together ever since. I never thought I would get married, but I found someone I couldn't live without."

Homme also described Dalle as his "punk-rock dream girl," adding, "I always thought if I could go out with a chick with a mohawk who also read philosophy, I'd be winning. Brody is the real deal. She does everything the boys can do and a whole slew of things no boy ever could."

Back in 2014, Dalle told The Guardian that she moved to America with money she got from the government of Australia for being sexually abused. "I'd gone through a couple of court cases when I was 14, 15 years old, and I'd been compensated for one of them," she explained. "When I turned 18, I got that money and got the fuck outta there."