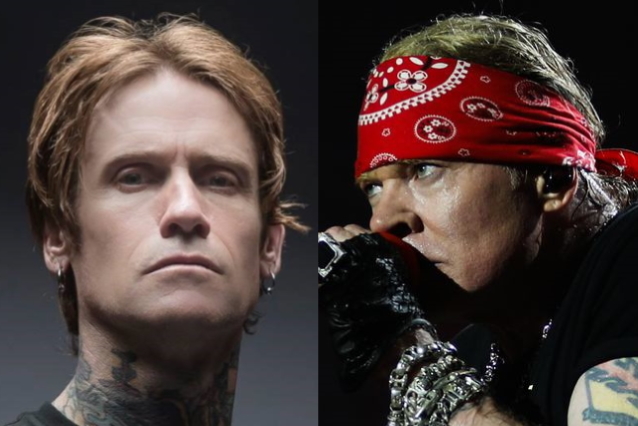 During an appearance on a recent episode of the GUNS N' ROSES-centric "Appetite For Distortion" podcast, BUCKCHERRY frontman Josh Todd reflected on his first and only face-to-face encounter with Axl Rose. He said (as transcribed by BLABBERMOUTH.NET): "I have always really loved Axl — as a singer, as a frontman. I just really think he's a really talented guy. And I never got to meet him. I'd been around places where he was close by and I didn't know about it and I never got to meet him. So, cut to [BUCKCHERRY] did a handful of shows with [GUNS N' ROSES in 2011]. And still, he's kind of a mysterious guy — he would always go on never on scheduled time. And at that point, we would always be in a bus, maybe traveling to the next location. Because we'd already left, so we never got an opportunity to link up. So cut to we do a show — I think it was one of the last shows we did with GN'R. And we're all on the bus after the show. And our tour manager goes, 'Hey, Axl wants to say hello to you guys. He's got something for you. You guys can come in the venue.' And I was, like, 'What? Yes!' So we got all our shit together, we go in the venue, and [it was] just the most bizarre experience. We're in the hallway of some arena. He comes out. He walks towards us. He's got a bag. It's plastic bag from Best Buy. He goes, 'How are you guys doing? I just wanna say it was nice having you guys out.' And he takes his bag out and he hands all of us an iPad — each of us an iPad — from Best Buy. 'I just wanna give you guys a gift and tell you how much we appreciate having you out [on tour with us].' And I was just, like, 'Are you kidding me? This is amazing.' I was speechless."

Todd continued: "It was one of the coolest gestures from one of your heroes that's ever happened. It wasn't that we got an iPad; it was that fucking Axl Rose gave us a fucking iPad. And we took a picture with him. And that was it. He left and walked onstage. And I was just, like, 'Man, that was, like, fucking amazing.'

"There's been a handful of experiences for me in my rock and roll career where I met some of my heroes and it was really a wonderful experience, and that was one of 'em," Josh added.

Back in 2002, Todd briefly fronted an unnamed group with then-former GUNS N' ROSES members Slash and Duff McKagan, who would later go on to form VELVET REVOLVER.

BUCKCHERRY's latest album, "Hellbound", came out in June via Round Hill Records. The follow-up to 2019's "Warpaint" was recorded last fall in Nashville, Tennessee with producer and songwriter-for-hire Marti Frederiksen, who has previously collaborated with AEROSMITH, DEF LEPPARD, Jonny Lang and Sheryl Crow, among many others.