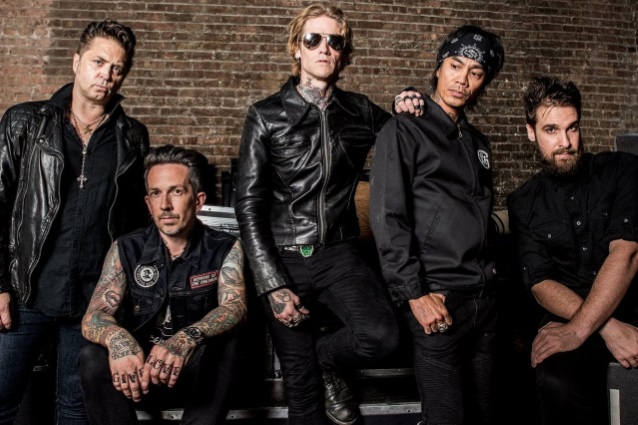 The "Rock Talk With Mitch Lafon" podcast recently conducted an interview with BUCKCHERRY frontman Josh Todd. You can listen to the entire chat below. A few excerpts follow (transcribed by BLABBERMOUTH.NET).

On whether BUCKCHERRY has a "signature sound" they will look to capture again on the follow-up to 2015's "Rock 'N' Roll":

Josh: "We wrote a lot of songs. We've been writing for months, so it's just got to be great. The songs have got to be great. I'm not interested in making 13-song records, or 12-song records anymore. It's got to be like a great 10-, 11-song record. Right now, to make a BUCKCHERRY record, you got to be a pretty good song, so we're just kind of sorting that out right now, but we have 10 songs right now that are really great and a lot of dynamics and mid-tempo, fast tempo, slow songs…it's going to be a really well-rounded BUCKCHERRY record. That being said, I don't know if we want to do a traditional-sounding BUCKCHERRY record. We want it to have the integrity of BUCKCHERRY, but kind of have a little bit more of a modern sound, so we're working on that right now as far as producers are concerned."

On his reasons for starting his JOSH TODD & THE CONFLICT side band, which released its debut studio album, "Year Of The Tiger", last year:

Josh: "I wanted to start another brand. It's very difficult, actually, because there's so many things that we got to have in order to go out there and build the brand. It's not like we're 18-year-old dudes who can just jump in a van. That's the real problem we're experiencing with the CONFLICT. We only got to tour seven weeks on that record because we got to have more money in it in order to go do it and provide for our families and stuff. We're going to make another record, of course. But, it's a slow build with the CONFLICT because it's a new brand. The idea was for it not to have it co-mingle with BUCKCHERRY in any way. That's why I did it. It's an amazing record. I love the CONFLICT record. We're going to make another one at some point, but right now, it's going along the same lines of what we said."

Josh: "There's so many albums that I've done that have not gotten the attention they deserved. There's so many BUCKCHERRY records. If you look at it, there's seven full-length BUCKCHERRY records, and, really, only one of them got promoted the right way, and that was '15'. So, you know, if I think about that too hard, it's just so heartbreaking, but I can't do that. All's I can do is just kind of learn from what happened during those cycles and just get better and that's what we're doing right now. I feel really good about the timing and everything of this BUCKCHERRY record. I feel like everybody wants it and that's really great. We got great songs and we got an amazing band. It's the best lineup ever in the history of BUCKCHERRY. We are having fun together and when that is going on, it's unstoppable."

Josh: "I can't even tell you. It's really hard to explain. When you're in a band and you're out there on the road, you're in really tight, close quarters, so being in a situation where guys don't necessarily respect and care for each other, it becomes just not fun. The last three years of BUCKCHERRY prior to that, it's been going on for like a year and a half since the lineup change, it's been a while, but the three years before the lineup change, it was just kind of a slow, nasty burn. You could just feel that things were changing and it wasn't fun. So, now it's a lot of fun and we're all in synch and the musicianship is really great. That's the one thing that is really awesome. I don't know if you've seen the new lineup, I like to say: 'Okay, we're an arena rock band now. This is the band I always wanted it to be.' I'm really happy."

BUCKCHERRY will enter a Californian studio this fall to begin record its new album for an early 2019 release. The follow-up to 2015's "Rock 'N' Roll" will mark the band's first release since the departures of guitarist Keith Nelson and drummer Xavier Muriel and addition of Roentgen and Winchester, respectively.