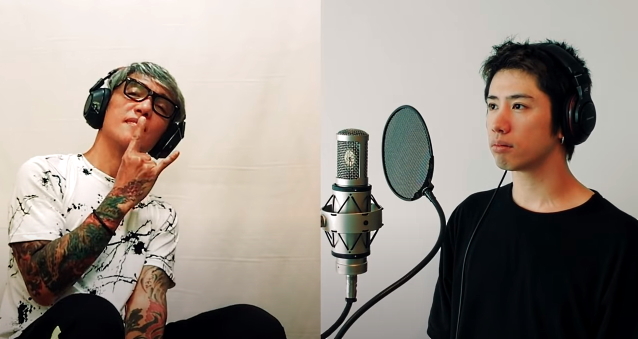 JOURNEY singer Arnel Pineda has teamed up with Takahiro "Taka" Moriuchi, the lead vocalist of the Japanese rock band ONE OK ROCK, to record a quarantine version of the JOURNEY's "Open Arms".

Pineda uploaded the video to his YouTube channel, writing in an accompanying message: "GOOD DAY folks..to honor the #legacy of #JOURNEY 's #ESCAPEalbum ,specifically #NealSchon #Jonathan Cain #StevePerry #RossValory #SteveSmith...me and my one of a kind & extra exceptional buddy rocker of the amazing band #OneOkRock #Taka decided to jam this song #OpenArms

"hope you'll enjoy it folks..and thank you in advance if you ever find yourselves listening and watching it for awhile.

"WE HAVE NO INTENTION OF OWNING NOR INFRINGE THE COPYRIGHT OF THIS SONG..

"ROCK ON BROTHERS AND SISTERS!!!"

Born in the Philippines, Pineda has been fronting JOURNEY since 2007 when guitarist Neal Schon discovered him leading a Manila cover band on YouTube. A vocal doppelganger for JOURNEY's longtime vocalist Steve Perry, Arnel has helped put JOURNEY back in arenas once again. But some fans were not happy about the addition of Pineda, complaining about his ethnicity and dismissing his voice as a "copycat" of Perry.

Although Pineda did not get inducted into the Rock And Roll Hall Of Fame with his bandmates in 2017, he did get up and join them at the ceremony, singing "Don't Stop Believin'" and "Lights".