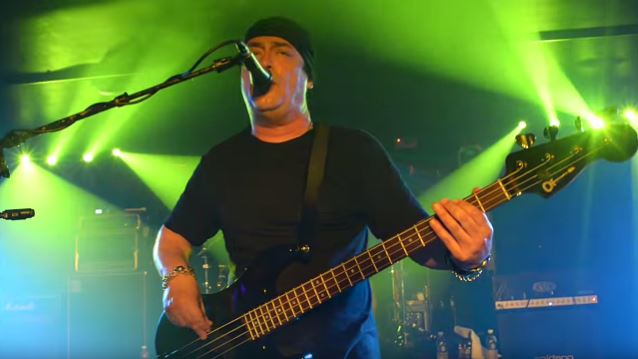 JUAN CROUCIER: 'There Is No Single Person In The Band RATT Who's By Themselves RATT'

Chaotic Riffs Magazine recently conducted an interview with former RATT bassist and current RATT'S JUAN CROUCIER bassist/vocalist Juan Croucier. You can now listen to the chat in the YouTube clip below. A few excerpts follow (transcribed by BLABBERMOUTH.NET).

Juan: "This band is not — number one — a cover band. I'm playing songs that I either wrote or co-wrote the majority of. And I'm just singing my songs, and I'm doing my thing. And no, it's not RATT. I would never even pretend it to be RATT, because it's simply not, okay? That's reality. I'm not RATT. There is no single person in the band RATT who's by themselves RATT, okay? That's the bottom line."

On RATT drummer Bobby Blotzer's trademark infringement lawsuit against Croucier in which he claims that Croucier "formed a band which tours around the world under the name Juan Croucier's RATT's [sic] and plays the songs of RATT":

Juan: "I can't really comment on that part of it. I just wanna have a sense of class, and that's the way I kind of like to conduct myself. I can say this though. What we plan on doing is we're going to be making records, and that's what it's all about. And I don't know what the future holds for RATT per se, but I do know that this band is moving forward and nothing and no one is stopping it; there's just no way. And so we're gonna be recording our own material. However, look, I'm a fan. I get how it works. And a lot of people really enjoy the RATT songs. So the idea was to sort of have this RATT material as an introduction to the band, and then slowly what we'll do is we'll incorporate our own songs, as long as they fit well and the people enjoy them. And as we move along, there may very well be a lot more original songs and not quite so many RATT songs. Or the set will just get longer. Instead of, like, and an hour and a half, it'll be two hours. [Laughs]"

On what it was like to rejoin RATT in 2012 after being away from the music scene for more than a decade:

Juan: "That's a really natural thing for me. The weird thing about it is I've never stopped participating in music. The thing about it was when the band broke up originally, there were some really bad things that happened, and I had to resort to making records for a living to sustain myself and to keep my home. I was also a single father of two young boys, who are grown now. But I refused to be an absentee dad. So instead of going back out on the road and thinking of myself in 1997, a big thing I had to consider was the fact that I was a single father of two beautiful boys that really needed their dad and that were counting on me, and that really played a big role in why I did not return to RATT, okay? And mind you, in all seriousness, there were other issues as well that I felt needed to be addressed. At the same time, I've kept playing. As of '97, as I said, I have a studio so I could always jam with anybody and play. I've never stopped playing and I've never stopped writing songs, but I did it on a much more local level. So I have been playing, just not nationally or internationally. But I have been playing. And going back to RATT, my intention was, of course, for the band to really shine as I've always wanted RATT to shine. And, you know, it took its course. So now I'm just… This is a natural progression for me. And it's what I do; I've been doing it so long. I mean, at this point, I've been playing professionally in bands for forty-three years."

On whether he has given any thought to writing a book, like ex-RATT singer Stephen Pearcy and Blotzer have already done:

Juan: "Yes, I have given thought to it, and, you know, if I'm to pursue something like that, sometimes it's difficult, because when you speak as opposed to when you write — and I type, like anybody else does these days… So, yes, I thought about it. I just don't want it to be a really negative thing. I want it to be something that just kind of shows the situation for what it was and explains what happened and does not besmirch others… People look to people like me for fun and a good time and to get away from the really serious and negative stuff that's happening these days. And we don't have to think long about that. There's enough negative stuff out there these days to where you don't need to be airing your dirty laundry or making claims that are kind of inappropriate. I mean, it's just a good time, man. It's rock and roll, you know."

RATT'S JUAN CROUCIER made its live debut on September 24, 2015 at the Token Lounge in Westland, Michigan.

Multi-camera fan-filmed video footage of the concert can be seen below.

Blotzer announced on September 23, 2015 that he was taking control of the RATT name and was planning to hit the road with a new version of the group, which played shows earlier in the year under the name BOBBY BLOTZER'S RATT EXPERIENCE.

RATT guitarist Warren DeMartini in September filed a lawsuit against Blotzer, claiming that the drummer was falsely advertising his "tribute band" as the real thing.