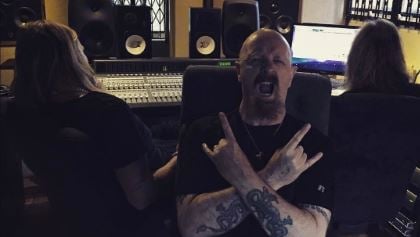 JUDAS PRIEST Back In The Studio: First Photos Posted Online

New photos of JUDAS PRIEST members Rob Halford (vocals),Glenn Tipton (guitar) and Richie Faulkner (guitar) in the studio working on material for the follow-up to the band's 2014 album "Redeemer Of Souls" can be seen below. The pictures, which were posted on PRIEST's Facebook page, were accompanied by the caption: "Making metal on ‪#‎metalmonday‬!! @robhalfordlegacy @falconfaulkner ‪#‎glenntipton‬ ‪#‎judaspriest‬ ‪#‎priestfamily‬"

Halford recently told Full Metal Jackie's nationally syndicated radio show about PRIEST's upcoming record: "We finished [the 'Redeemer Of Souls'] tour, this big world tour, just before the holidays in December, and we're about to start writing sessions pretty much now. And that's great. Oh, man, I can't wait to get into the writing zone again. That, to me, [is] one of the most thrilling moments for me personally in PRIEST. You go into a room with some amps, and turn the amps on, start riffing and boom, you could have another amazing PRIEST song by the end of the day. I love that part of being in PRIEST. So that's the next step — writing sessions, get some really good, solid PRIEST material ready, and then, you know, Scott [Travis, drums] and Ian [Hill, bass] come in and we jam and we start putting the songs together. Like always, it'll be ready when it's ready, but there was already an extraordinary amount of ideas collected throughout that tour. So I'm optimistic that we should have something ready by… probably not by the end of this year, but definitely by the early part of next year."