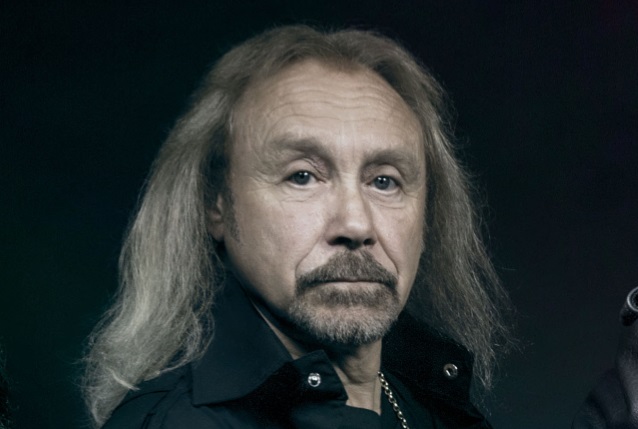 Val Tapia of 38IZ Videos recently conducted an interview with JUDAS PRIEST bassist Ian Hill. You can now listen to the chat below.

Asked how Andy Sneap is doing filling in for JUDAS PRIEST guitarist Glenn Tipton, who announced two months ago that he was stepping away from the road due to his battle with Parkinson's disease, Hill said: "He's doing really, really well, especially when you consider he only had about three weeks to put a nearly two-hour set together, with lead breaks. And, of course, as the tour is going on, he's getting more confident on stage as well and he's putting in some tremendous performances in now. So musically, really, there's nothing missing — nobody will miss anything musically. Visually, of course, there's a big difference there; of course, Glenn isn't there. He's been an integral part of the band for all these years, for over 40 years."

Ian continued: "It was a huge hit when [Glenn] said he couldn't do it. It wasn't a surprise; I think we all knew that it wasn't gonna happen this time around. He was diagnosed just before the ['Redeemer Of Souls'] tour, and during band rehearsals, he was pretty rough to start with. But as the days went on, he got better each day, to the point where he put in some tremendous performances on the last tour. And we were kind of hoping that was gonna happen this time around as well, but after the first week, we knew he couldn't do it. It was a tragic thing, really. And the hardest part was Glenn convincing himself that he couldn't do it. But Andy stepped up to the plate, and he's doing a great job — he really is doing a great job. He's a sort of perfect replacement, really, inasmuch as he's intimate with the new material, so he knows the structure of all the new songs, which is very important when you're trying to learn something. And he's been a fan of the band for years as well, so you can trust him with the band heritage, if you like. So he was a perfect fit."