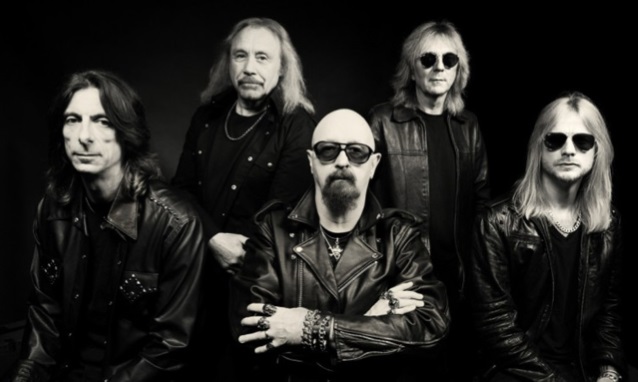 JUDAS PRIEST bassist Ian Hill was recently interviewed by Peoria's classic rock station 95.5 GLO. You can now listen to the chat using the SoundCloud widget below.

Speaking about the fact that JUDAS PRIEST's new album, "Firepower", entered the Billboard 200 chart at position No. 5, making it the band's highest-charting album ever, Hill said: "Who would have thought that? [For] our band, [which] is knocking fifty years, to still be popular and relevant enough, I suppose, in today's world to be able to achieve that. It took everybody by surprise, I think. It's a great achievement though, and we're hugely thankful for it."

Asked why he thinks PRIEST's music has endured so long, Hill said: "I think it's because we try and keep current. With every album and tour cycle, we try and take a step forward. I mean, we're still learning things every day, basically, and we, like I say, try and improve with each cycle, and I think it's kept us current and relevant. Some bands, they'll do basically the same album over and over again, and people love 'em for it — I love 'em for it — but it's something we've never done; we've always tried to move along. [If there's] a new recording technique, we'll give it a try, and if it works, great; if not, it gets discarded and we move on. I think it's that more than anything that's kept us going and kept us popular anyway — it's the quest to stay current, basically."

"Firepower" moved 49,000 equivalent album units in first week of release. Of that sum, 48,000 were in traditional album sales, just shy of the 54,000 copies sold by "Angel Of Retribution" in that album's first week. The "Firepower" chart position was bolstered by sales generated from a concert ticket/album sale redemption offer in association with the band's current North American tour.

As previously reported, "Firepower" landed at position No. 5 on the U.K. album chart. It marks the band's highest ranking, and first time in the Top 10, since "British Steel" reached No. 4 in 1980. Elsewhere, "Firepower" has also become PRIEST's first-ever No. 1 in Sweden.

"Firepower" was released on March 9 via Epic. The disc was recorded by British producer Andy Sneap, the band's longtime collaborator Tom Allom and engineer Mike Exeter (BLACK SABBATH). The cover artwork for "Firepower" was created by the Chilean/Italian artist Claudio Bergamin.

JUDAS PRIEST"Firepower" world tour marks the band's first run of dates since guitarist Glenn Tipton announced that he was retiring from the road due to his battle with Parkinson's disease. He is being replaced on tour by Sneap, also known for his work as the guitar player in NWOBHM revivalists HELL and cult thrash outfit SABBAT.