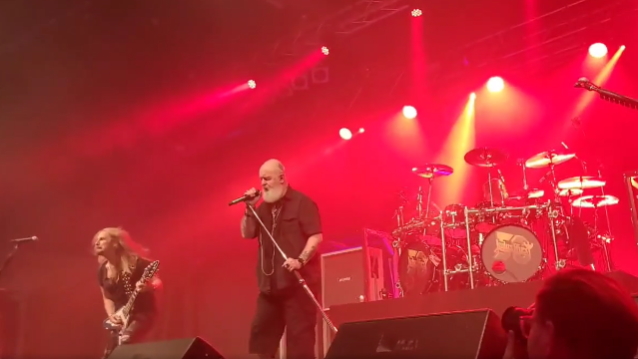 British heavy metal legends JUDAS PRIEST kicked off their spring/summer 2022 European tour with an intimate concert last night (Tuesday, May 31) in Berlin, Germany. For the gig, which was held at the 1,600-capacity Huxleys Neue Welt venue, Rob Halford and his bandmates ditched their traditional leather-and-studs look in favor of a more stripped-down appearance.

After the show, PRIEST guitarist Richie Faulkner took to his social media to share a photo of the performance, and he included the following message: "Last night in #berlin was glorious and something I've never done with the band before. No leather, no studs. No screens, no motorbike. No massive light show or inflatable Birmingham bull. Exposed speakers, just jeans, t-shirts, a small club and it was all purely about the music. All of us together and the raw power of the music. It was truly a great experience and one I'd love to do again sometime.

"It's great when you strip it all back to what it's all about, the music and the people of our great heavy metal community.

"Thank you all for making it such a special night.

"Onwards we roll to #gdansk #poland for the @festivalmystic".

In a 2021 interview with Spain's Mariskal Rock, Halford was asked who wore the "leather biker look" first — him or late QUEEN frontman Freddie Mercury. He responded: "I remember seeing a picture of Freddie with his leather jacket and a cap and a motorcycle, and I'm, like, 'What the fuck is going on, Freddie?' [Laughs]

Four years ago, former JUDAS PRIEST guitarist K.K. Downing was quoted as saying in Greg Prato's book "Long Live Queen: Rock Royalty Discuss Freddie, Brian, John & Roger" that Halford "definitely" pulled off the "leather biker look" better than Mercury. "Actually, that's probably one of the best questions I've ever been asked," Downing said. "Because both of the guys, obviously being gay and both obviously having donned the leathers — which is par for the course — I think the difference was it became Rob's ultimate and permanent image. Whereas Freddie did it for a bit of fun, I think. But [it is] a fun question — I like that a lot. Definitely Rob looked like the epitome — as I hope we all did, together, when we all eventually got into the leather gear — of an archetypal heavy metal band."

Last night in #berlin was glorious and something I’ve never done with the band before. No leather, no studs. No screens,... 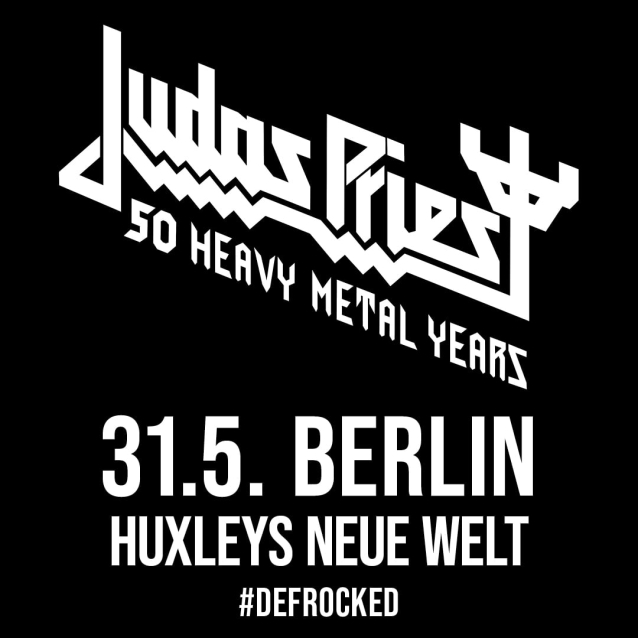