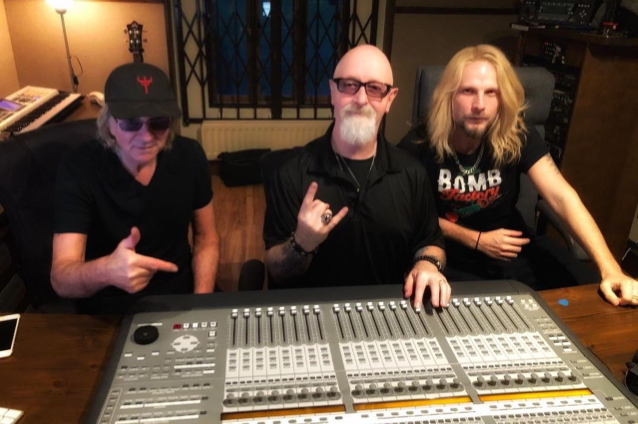 JUDAS PRIEST Has 'Practically A Complete Album' Waiting To Be Recorded

JUDAS PRIEST singer Rob Halford and guitarist Richie Faulkner have offered separate updates on the progress of the songwriting sessions for the band's follow-up to "Firepower" album. Released in March 2018, "Firepower" was the second LP to feature the 40-year-old Faulkner, who was selected to fill the void left by founding guitarist K.K. Downing following his exit in 2011.

In a new interview with NME, Halford said: "As far as PRIEST goes, we already have a strong selection of songs — practically a complete album — to go when we're able to reconvene at some point. But we need to do a lot more work on it before we even get to the full production stage yet."

Faulkner told SiriusXM's "Trunk Nation With Eddie Trunk" that the creative process for PRIEST's next LP was halted by the coronavirus outbreak, which disrupted global travel.

"We started on the new record earlier in the year — me, Glenn [Tipton, guitar] and Rob — and we all went home for the summer," Richie said. "We were all gonna reconvene later on. 'Cause we really wanna get back together and do it all together — that's the way the magic happened on 'Firepower' — and we just haven't had the chance to be able to do that. But as soon as we can, and as soon as we get back to some sort of normality, we'll get back in the studio and continue with it."

Last year, Halford told Goldmine that PRIEST "had one of the strongest experiences ever with the 'Firepower' record." He explained: "Just when you think you've not exactly done it all, seen it all and had it all, you go into the studio with this great producer combination that we've never known, and the great music that Richie brought into the mix after he first kind of embedded himself and grown during 'Redeemer Of Souls'. By the time we were at 'Firepower', it really jelled and he knew what he needed to do. 'Redeemer' was still a process of discovery for him. With 'Firepower', he was more attuned and acclimatized to it."

Rob continued: "The general attitude and atmosphere was a bit like how we went in to making 'Painkiller', which was an important record to make for lots of reasons. The way that 'Painkiller' was able to really refine and define this band, I think we came to the same kind of place again with the music from 'Firepower'. And this far on, that was just a great, great time for the band — it's really lifted us in many ways. As a result, the prospect of making the follow-up to 'Firepower' is really intriguing. I haven't a clue where we're going to go with it, but as far as the opportunity in the sense of really wanting to make another strong, important record goes, you know, watch out — the PRIEST will definitely be back. [Laughs]"