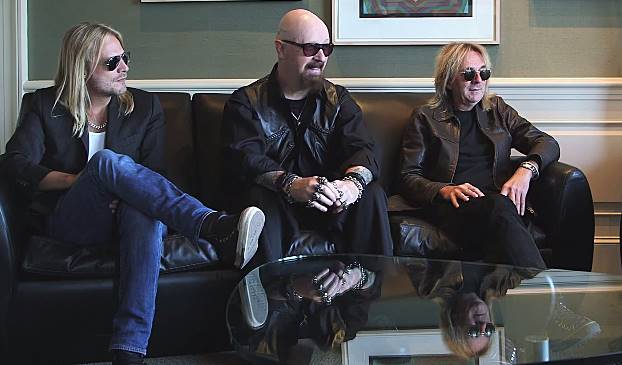 Scoop of the 96.9 WOUR radio station in Utica, New York recently conducted an interview with JUDAS PRIEST members Rob Halford (vocals), Glenn Tipton (guitar) and Richie Faulkner (guitar). You can now listen to the chat using the SoundCloud widget below.

"This album has got vikings, dragons, aliens, a bit of bible thumping and some guns," Halford told Ultimate Classic Rock. "That's what you need in a metal record. It's strong and it's intense, but there's a lot of fun and exploration, through at least that side, with the lyrical content."

"We felt it was important to make another classic metal album, which is generally what PRIEST has been famous for over the last 40 years," Halford continued. "We had great success with [2008's] 'Nostradamus', which was something that we'd always wanted to try. I think there was a nice enough space of time, musically, to do a lot of things but primarily just to kind of get all of the pieces into place to make what we feel is one of our best records — with all of the elements of what classic PRIEST stands for."

"It's nice to get back to what people want to hear," Tipton added. "This album just typifies JUDAS PRIEST."

JUDAS PRIEST's 2008 double-disc concept album, "Nostradamus", shifted 42,000 copies in the United States in its first week of release to debut at No. 11.

JUDAS PRIEST's most successful album to date is 1982's "Screaming For Vengeance", which spent 53 weeks on the Billboard charts, receiving gold RIAA sales certification on October 29, 1982, platinum on April 18, 1983 and double platinum October 16, 2001. The album included the band's only U.S. top 100 hit single, "You've Got Another Thing Comin'".