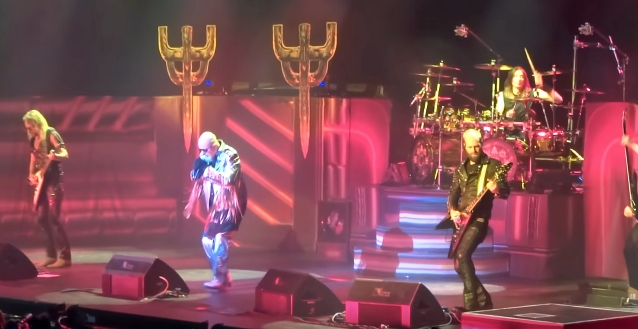 As part of its ongoing "Firepower" world tour, PRIEST has been playing a number of tunes from its classic '70s albums that created the blueprint for modern metal. Earlier this year, the band performed "Saints In Hell" from 1978's "Stained Class" and dusted off 1976's "Tyrant".

JUDAS PRIEST is touring in support of its latest album, "Firepower", which was released in March via Epic.

"Firepower" entered the Billboard 200 chart at position No. 5, making it the band's highest-charting album ever.

Bassist Ian Hill is the sole remaining original member of PRIEST, which formed in 1969. Singer Rob Halford joined the group in 1973 and guitarist Glenn Tipton signed on in 1974. Rob left PRIEST in the early 1990s to form his own band, then returned to PRIEST in 2003. Founding guitarist K.K. Downing parted ways with the band in 2011, and was replaced by Richie Faulkner. Earlier this year, Tipton stepped down from touring with the band due to his battle with Parkinson's disease. His spot in the band is being filled by "Firepower" album producer Andy Sneap.